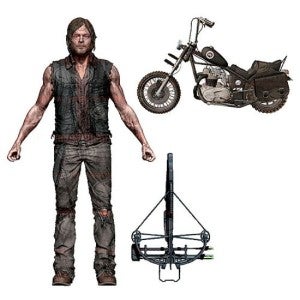 McFarlane Toys has already produced a couple of Daryl Dixon action figures, but now they are taking it a step further. In their first vehicle set for The Walking Dead, McFarlane Toy is producing a Daryl Dixon Figure & Motorcycle Deluxe Box Set. The deluxe box set features Daryl Dixon in his angel wings stitched biker vest, along with his trusted chopper. The bike includes the lightning-bolt insignia on the tank, skull decal, and saddlebags. Other accessories will include Daryl's hunting knife and updated crossbow. The Daryl Dixon figure will have 20 points of articulation and is being done in the authentic likeness of actor Norman Reedus. The 5-inch tall figure's exact likeness is created using a full 3D scan of the actor himself. The Daryl Dixon Figure & Motorcycle Deluxe Box Set is scheduled to be released in March 2014. Image courtesy of Entertainment Earth, where the figure can be pre-ordered.

The Walking Dead: Daryl Dixon Action Figure Gets A Motorcycle