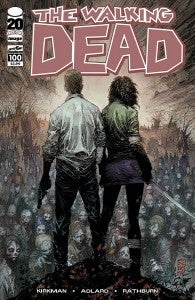 Last week was, relative to the insanity of the week before, a relatively slow news week in comics, but that doesn't mean there wasn't plenty to talk about. Aside from Moriarty writer Daniel Corey checking in to suggest his favorite Sherlock Holmes adaptations, and a local retailer from Syracuse who had a cute encounter with a young fan (the story went viral on Reddit), there was quite a bit of industry news going on, and a fair amount of rumor, to boot. Here's a recap of what you might have missed... In addition to talking to Brian Wood about The Massive #1 (which hit the stores last Wednesday after a run-up that began at lat year's New York Comic Con), ComicBook.com spoke with writer Ron Marz about Prophecy, his new Dynamite miniseries that mashes up a number of popular characters including Sherlock Holmes, Red Sonja and Vampirella and takes on the Mayan doomsday prophecies that tag this year as the end of the world. The week started out with DC Comics announcing the cancellations of Voodoo, Captain Atom and Resurrection Man, in addition to the introduction of a new Green Lantern (with an awful costume) and a number of  creative changes, all coming up during their newly-confirmed zero issues in September. They're also throwing fans of a number of cancelled New 52 titles a bone in the form of final stories written by the creative teams behind those books. (And, yes, we got our first look at Kenneth Rocafort's Superman.) Valiant announced that Ninjak would be joining their universe, as well as that X-O Manowar #1 has a third print on the way. Meanwhile, Marvel announced that a new character would be introduced later this year, just in time to celebrate Spider-Man's fiftieth anniversary. Spidey himself had a pretty busy week, meeting up with Miles Morales (Ultimate Spider-Man) in the new series Spider-Men, which debuted last week. We spoke to series writer Brian Michael Bendis about that and other projects, while Marvel teased its third issue and Bendis tweeted about a mystery project that may or may not ever see the light of day. That's alright, though; he'll land on his feet. Rumor has it he'll be taking over two X-Men titles, including one relaunched just for him, when he leaves Avengers. On the other side of the Big Two aisle, rumor has it Jim Lee will be leaving Justice League to make time in his schedule for a WildC.A.T.S. relaunch, something that would be part of a rumored Fourth Wave of New 52 titles, including a Justice League International replacement and more. In the coming soon column, we also had word of a new Burn Notice e-comic, along with an upcoming Star Trek: The Next Generation miniseries from IDW. Last, and arguably most significantly, The Walking Dead #100 is rumored to have sold around 300,000 copies at the distribution level and will, if that number is true, most likely be the best-selling single-issue comic of the year.

Wait, Is Fortnite Chapter 3 Bringing Back the Old Map?