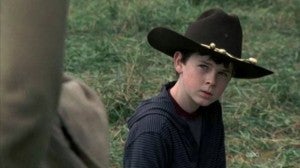 Caution: Massive spoilers ahead for tonight's episode of The Walking Dead. Read on only if you've already seen it.

Anytime a major plot event happens off camera in a TV series or movie--or off-panel in a comic book--the question is the same: did what we think just happened, really happen? This week, we saw a perfect example of it as a character everyone assumed to be dead came back to haunt the survivors, with earth-shattering consequences. Obviously, there's also Merle. It certainly seems as though what happened tonight was a pretty straightforward moment in the character histories of Carl and Lori Grimes, but since the writers and director chose to work with so much silence, it's difficult to say definitively. We've now given sufficient spoiler space to drive away all but the most foolish of those who don't wish to be spoiled, so we can continue with less vague language. After Lori's apparent death tonight, her son waved off an offer by a family friend to put a permanent stop to Lori so that she wouldn't reanimate as a zombie. He was determined that it was his responsibility--he needed to look out for his mother, for his sister and he needed to keep a promise he made to his father, back when his father first gave him that gun. But we never actually see him shoot her. We simply hear the gunshot and then see him moving away at a very brisk clip. The camera also stayed on the sign to the room for a second longer than it normally would when Carl, Beth and Lori made their way into the makeshift delivery room. Could this be something that they're setting up for later in the season? Carl was silent following the apparent shooting, and obviously distraught. Shooting your mother in the head will do that to you, especially when you're a ten-year-old boy. But what if it's that he failed his mother, disappointed his father, and that he knows he's now put lives in danger because he couldn't bring himself to shoot her? What if, as much as anything, Carl is coping with the possibility that someone he loves could open that door and find themselves face to face with zombie Lori? Or, even a step more unlikely than that--what if the next episode begins with his confession that he didn't do it and leads into a mad dash back to the apparent body to see whether anyone can save her, or destroy the brain before she reanimates with all of her pregnancy bits hanging out? Is it a reach? Certainly--but as we said...if it didn't happen onscreen/on the page...did it really happen?

The Walking Dead: Did Carl Really Do it?

Isekai Of The Dead Combines Isekai Genre With Zombies