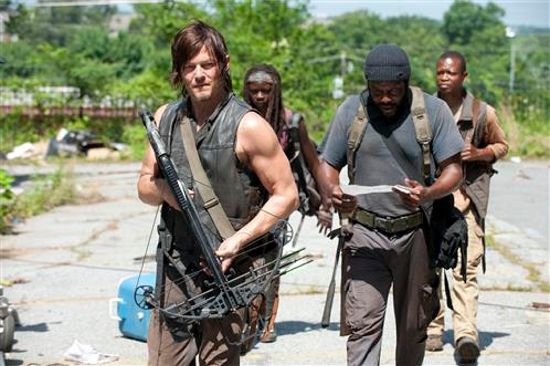 The latest episode of AMC's The Walking Dead was the top-rated scripted show of Sunday night, beating out everything except Sunday Night Football. Even there, The Walking Dead beat out the NFL in the key 18-49 audience demographic that conventional wisdom says advertisers are looking to hook into. Overall, football had just over 15.4 million viewrs, to The Walking Dead's 13.3 million--but according to Deadline, the episode drew 8.7 million "in the demo," versus 8.1 million for football, which is apparently skewing somewhat older. Last week, The Walking Dead had 8.6 million viewers in the demo, compared to 8 million for Sunday Night Football. In both cases, the teams playing were popular and with passionate fan bases but their home cities (Houston, Green Bay, Minneapolis and Indianapolis over the two-week period) aren't the major markets that drive close ratings races. The NFL's lead in the demo held over The Walking Dead a few weeks ago, when the Denver Broncos and Peyton Manning were playing.