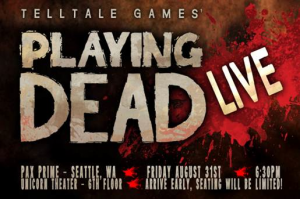 The third installment of Telltale Games' video game adaptation of Robert Kirman's The Walking Dead comes to most formats today, and below you can check out the trailer before you go buy. Says Telltale:

The Walking Dead: Episode Three – Long Road Ahead will be launching today on PlayStation Network in North America, and worldwide tomorrow on Xbox Live Marketplace, PC & Mac.  The episode is the most emotionally turbulent in the series yet, and we've got a brand new launch trailer here for you today along with some fresh screens. (Note: A release date for PSN in Europe has yet to be confirmed by our partners at SCEE, and we will update everyone as soon as a date has been confirmed.)

In addition to all of this, your team at Telltale WILL NOT BE STOPPING ALL WEEK and we're excited to see everyone in Seattle for PAX PRIME! We'd love to have you stop by Booth # 3117 in the South Lobby. We'll be onsite with The Walking Dead development team loaded with special surprise giveaways for fans including LIMITED EDITION 'The Walking Dead' T-Shirts,  a rare chance to say hello to some of Telltale's finest writers and designers, and also by popular demand, a special 'taste' of the game series itself, one that will NOT be for the squeamish.  ;-) We'd love to have you swing by to say hello, check out the series so far, and also get some hands-on time with this highly anticipated third episode of The Walking Dead - 'Long Road Ahead.' In addition to our booth presence and The Walking Dead giveaway-surprises this year for our fans, we'll also be hosting a major PAX PRIME panel event, Friday August 31st @ 6:30pm in the Unicorn Theater!

Nintendo Direct for February 2023: How to Watch and What to Expect