While ComicBook.com took time out last weekend during the season premiere of AMC's The Walking Dead to confirm that, yes, those leapfrog statues do exist at the Atlanta Airport, it never even occurred to us to wonder what book it was that Carol was reading to the kids at storytime. That's too bad because, according to a Redditor who recognized the text, it was actually kind of a cool find--and something with some thematic significance. The passage Carol reads to the kid before the knives come out is from The Adventures of Tom Sawyer by Mark Twain. Specifically, it's form a portion of the book where Tom and Becky Thatcher are lost in a cave, with little hope of rescue and a candle that's burning down to almost nothing. 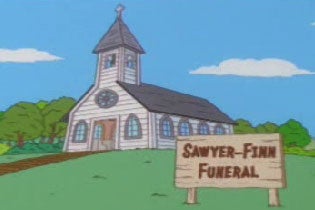 Here's the bit, as transcribed by Redditor RickGrimesBeard: "The children fastened their eyes upon their bit of candle and watched it melt slowly and pitilessly away; saw the half inch of wick stand alone at last; saw the feeble flame rise and fall, climb the thin column of smoke, linger at its top a moment, and then -- the horror of utter darkness reigned!" That in and of itself could be a metaphor for the world of The Walking Dead--the idea that whatever flicker of hope you're holding onto, it'll eventually be snuffed out because the world they're in is just a long march toward despair. It could be that not only is Carol hoping to prepare these kids to defend themselves, but for the inevitability of their failure to do so. More explicitly and simplistically, though, think of this: The Adventures of Tom Sawyer is a book in which the lead character is thought dead and then returns. Of course, you don't want to see characters from The Walking Dead pop up at their own funeral; things would, inevitably, get messy.

The Walking Dead: Even The Children's Books Are Depressing...