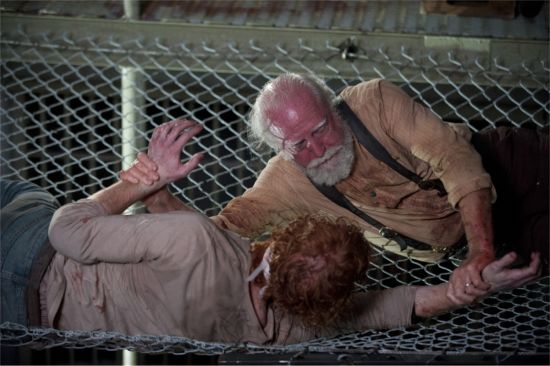 The Walking Dead both wrapped up Season 3 and kicked off Season 4 during 2013. Some of our best moments we selected come from Glen Mazzara's time as showrunner, while other moments occurred after Scott M. Gimple took over as showrunner. Needless to say, if you haven't caught up on your Walking Dead viewing, spoilers are contained in the article below. This collection of moments aren't about the most shocking moments, but rather they are the scenes where a little bit of hope that things were going to be ok made its way into the zombie apocalypse. 5. Daryl's Heroic Return To Rescue Rick – In "The Suicide King" episode, Daryl leaves Rick's group because of their refusal to allow Merle to come back to the prison. In the "Home" episode, The Governor attacks the prison, creating chaos. Rick gets trapped outside the prison and is surrounded by walkers. Just when it looks hopeless for Rick, Daryl makes his triumphant return and saves Rick at the last moment. 4. It's Hammer Time For Tyreese- Just when it was beginning to look like Tyreese might be the most underutilized character on The Walking Dead, he breaks out the hammer. In the "Isolation" episode, Tyreese is surrounded by walkers. He appears to be hopelessly outnumbered, as he swings his hammer against the overwhelming horde. Daryl, Michonne, and Bob are forced to leave Tyreese behind, but somehow Tyreese manages to survive and catches up with the group. 3. Rick And Maggie Rescue Daryl – In "The Suicide King" episode, The Governor forces brothers Daryl and Merle to fight to the death. However, Rick and Maggie show up and rescue both Daryl and Merle. Just when The Governor thought he had the upper hand, his plans go up in smoke and gunfire. 2. Hershel Saves Glenn – In the "Internment" episode, Glenn was at death's doorstep from the deadly flu virus. With the quarantine area becoming overrun with the sick turning into walkers, Hershel stepped up and wrestled a breathing apparatus away from a walker. Hershel managed to keep Glenn alive for just long enough with the breathing apparatus for Daryl's group to get back with medicine. 1. Michonne Stabs The Governor – After all the evil that The Governor wrought in Season 3 and 4, it was great to see him finally get his just reward during the Mid-Season finale. Just as it looked like The Governor would choke Rick to death, a familiar katana came jutting out of his chest. As The Governor collapsed, Michonne was standing behind him, having finally fulfilled her promise to kill The Governor. (Even though Lilly ultimately finished The Governor off, it was Michonne who put him on his journey to death.)