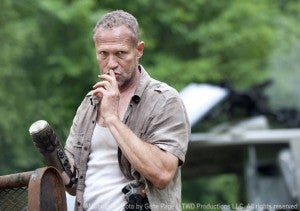 After a leaked set photo confirmed it for anyone who had their doubts yesterday (and really, how many of you were there, given that the actor had already promised a return for this season), AMC released an official still image today that shows [Spoilers] Merle Dixon back onscreen after more than a season of absence. Played by Michael Rooker (Henry: Portrait of a Serial Killer, Mallrats), Merle was the white supremacist brother of Daryl Dixon, who has become a major part of Rick Grimes' band of survivors since his brother disappeared from a rooftop where he was handcuffed during the show's first season. In order to escape, Merle removed his own hand--which is why you can see him now with that snazzy appendage. Yesterday's photo seemed to go a step further, with an offensive anti-walker weapon attached to his arm at the wrist and, perhaps more menacing than that, it appeared to show him riding in a vehicle previously associated with Woodbury's Governor. The Walking Dead's third season begins in October on AMC. The comic book it's based on will see its hundredth issue published in July. Look for an interview with Robert Kirkman here at ComicBook.com next month.

The Walking Dead: Guess Who's Back?

Marvel's Guardians of the Galaxy TV Spot Revealed Ahead of Release