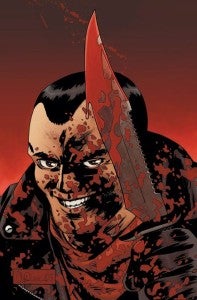 Even though The Walking Dead TV series premiered on October 31, 2010, The Walking Dead comic book series has been around a lot longer. In fact, the first issue of The Walking Dead was published way back on October 8, 20003. In the letter's page of The Walking Dead #111, a fan poses the question of if there might be anything special planned in order to celebrate the tenth anniversary of the first issue of The Walking Dead. In comic books, publishers rarely miss an opportunity to promote significant anniversaries, and a black-and-white comic book about zombies reaching ten years of publication is a pretty big milestone. Skybound's editorial director Sean Mackiewicz replied to the question with the following short but chilling answer: "July. You are not prepared." With July being the month when San Diego Comic Con is held, it's likely that the announcement of what Robert Kirkman has planned will be made there. The bigger question though is what could fans not be prepared for. Kirkman celebrated the 100th issue of The Walking Dead by killing off a major character. Could he be planning to kill off another key character for the 10th anniversary issue? Would Kirkman even dare to kill off Rick Grimes?