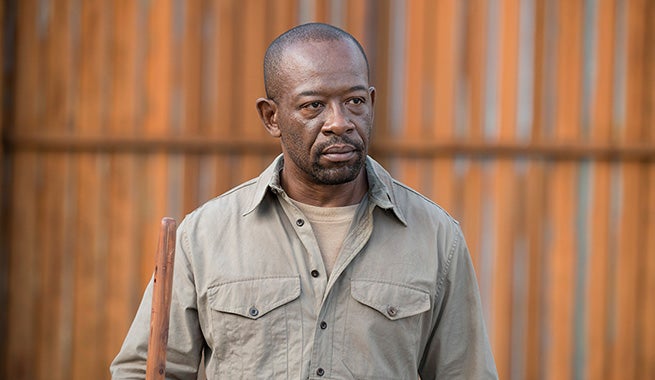 Tonight's episode of The Walking Dead was outright chaotic but in the midst of all the death and mayhem, several new storylines seemed to be birthed.

Spoilers ahead if you haven't yet watched "JSS."

The biggest mystery opened up by JSS is not what JSS stands for, because we now know it means "Just Survive Somehow," but rather, it may be the question of, "How do the Wolves know Morgan?"

Prior to chasing the remaining Wolves out of Alexandria's gates, Morgan had a standoff with some Wolves. The only one he spoke to recognized him, saying, "You live here?"

Morgan recognized the man, as well, as indicated by his knowledge of the Wolves not having guns, when he claimed, "Your people don't have guns. Mine do."

The most plausible assumption for how the Wolves and Morgan came to know each other is along Morgan's journey. Don't forget, Morgan encountered the Wolves in the season five finale. They told him to, "Just be still," as they attempted to take every last drop of his supplies. Morgan most likely encountered more than one of these savages along his journey to the Safe-Zone, especially since he happened to stumble upon their headquarters where the Del Arno food trucks full of zombies are parked.

The man Morgan encountered in the streets of the Safe-Zone was the same one he encountered in the woods during the season five finale. He looks a bit different, with a new hairstyle and a slightly different "W" on his forehead, but how he knows Morgan was revealed in episode 5x16. For further confirmation, you can look at the clothes he is wearing, with the biggest indication being the knee brace or bandana wrapped around his knee. They are same.

As for how Morgan knew the Wolves didn't have guns, that also stems from his season five finale encounter. While the other man pointed his gun a Morgan to threaten, Morgan found out the gun was empty upon disarming him.

Check out our recap of JSS with Melissa McBride!

Shamefully, we won't find out anything else about the Wolves from any of the captives Morgan attempted to take because Carol put them down, but we will most likely find out next week if Morgan opens up about it or in the flashback episode Scott Gimple mentioned at Comic Con.

The Walking Dead airs Sundays at 9 PM EST on AMC.

The Walking Dead: How Do The Wolves Know Morgan?