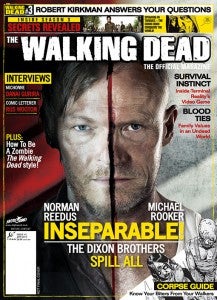 Coming up in March is the third issue of The Walking Dead Magazine, which covers the video games, comics and of course the highly-rated TV show from writer/creator/executive producer Robert Kirkman and company. And on the cover? None other than the fan-favorite Dixon brothers, original characters created for the TV show who have surprised comic book readers by quickly becoming some of the most interesting and beloved characters on the series. The actors who play the pair, Michael Rooker and Norman Reedus, have become hard to pin down one-on-one as well, appearing in interviews and at comic book conventions together--as they do in the March issue of the magazine, talking about the Dixon Brothers, and Skybound has released the image to Entertainment Weekly. With the show returning in February and the pair just reuinted in the final moments of the midseason finale, expect this one to be a big seller, driving interest just after the midseason premiere brings the characters back to action.