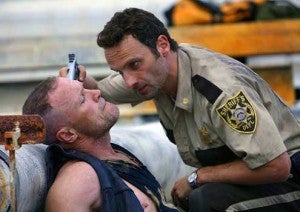 More like Henry, portrait of a spoiler. At this weekend's WonderCon, veteran actor Michael Rooker appeared to promote a new video game, "Lollipop Chainsaw," in which he's featured. It wasn't long, as one might expect, before questions turned to his role as the missing Merle Dixon on AMC's The Walking Dead. Numerous sources report Rooker revealing that Dixon will return in the show's third season, and that he had to drop almost 20 pounds for the role, but that the actor was unable to reveal anything more than that. The weight reveal has already led some to believe that he may be on the run from, or captured by, season three big bad The Governor. The last time viewers saw Merle, it was as a hallucination in the mid of his pain-addled brother Daryl. Before that, his first true appearance was on a rooftop in Atlanta where he was left, handcuffed to a pipe, after he was determined to be a threat to the group. While their intention had been to release him before they left, the keys were lost and when Rick returned later to recover him, it appeared as though Merle had managed to saw his own hand off in order to get free. Since the Dixons were never in the comics, Merle's disappearance (and the implication that he would someday return to the show) has been something of an enduring puzzle for fans of both the show, and of the comics (who often think--sometimes incorrectly--that they know what's going to happen to these characters as a result of their familiarity with the source material). In addition to The Walking Dead, Rooker has had roles in genre fare such as Archer, Psych and Mallrats. The Walking Dead's season finale airs tonight at 9 p.m. on AMC, followed by a special episode of Talking Dead which will feature comic book creator Robert Kirkman and feature a special announcement about season 3, according to the network.