Robert Kirkman told Chris Hardwick on tonight's episode of AMC's Talking Dead that the clip they chose from the midseason premiere of The Walking Dead was a hard one to manage. Hardwick explained that almost any clip they used would spoil some aspect of the episode, which airs in February, since so much was left up in the air at the end of tonight's midseason finale. Kirkman noted, though, that while it doesn't explicitly spoil anything, the scene they screened will inform comic book fans about what it is that's next on the agenda, because it's beat for beat an adaptation of something from the comics. 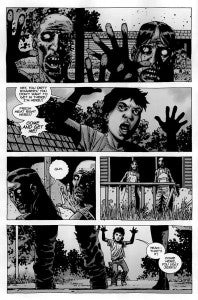 Indeed it is--specifically, from The Walking Dead #50. In the wake of the battle at the prison (which in the comic book series claimed Lori and the newborn Judith, along with a number of other important survivors from Rick's camp), Rick and Carl have made their way out into the community nearby. Holed up in a house they cleared of walkers, Rick is ill and passes out for hours, leaving Carl to wonder whether his father will die, turn and he'll have to kill the last family he has. As he waits in silence (as it has been in recent episodes of the TV series, noise is a big no-no when you're in unexplored territory at this point in the story since there are swarms of walkers roaming around everywhere), a pair of walkers make their way to the door. It's a bit like the sequence from the series pilot, actually--when Morgan's wife wanders back toward her own door, a faint semblance of recognition enough to keep him from taking her head off with his sniper rifle because maybe there's something left of her inside. Carl's prime concern in the pages below, taken from the issue in question, is to draw the walkers away from the house in which he and Rick are camped out; he does it as quietly as he can, at first, but not everything goes according to plan. This will also play into the scene from the pilot that shows Carl screaming at his father to wake up; that sequence happened during this same story. 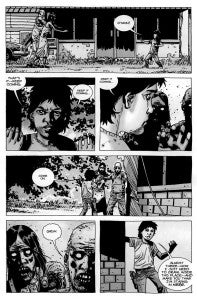 Given widely-circulated reports that Abraham, Eugene and Rosita (who first appeared in #53 of the comics) will debut in episode 10 of the season (so--not the midseason premiere but the one that comes right after it), it doesn't seem unlikely that what we'll see in the midseason premiere is a kind of modified version of the "Andrea episode" or the "Governor episodes" that we've had in the past: a primary or exclusive focus on a character (in this case, Carl and Rick), that bridges two storylines with character work. The idea of Rick being so sick that he passes out might change to head trauma as a result of his brutal fight with The Governor. On the other hand, a violent illness has just worked its way through the prison, who it might make sense to follow up on that thread. In the comics, Carl was depicted as much younger and less capable at this point in his development; we've already seen Chandler Riggs's Carl take care of himself a few times since the last major screw-up (when he inadvertently led the walker who would kill Dale back to the camp), so what might take the place of a lot of the panicking and "I can't do this" of the comic book series is a sense of urgency and purpose, as he weaves through swarms of walkers to break into various houses in the neighborhood looking for antibiotics or something. Now...there's a lot of gunfire in this sequence. If that's replicated in the TV series, given the way the walkers have been recently, will we see a massive swarm gathered outside of Rick and Carl's hideout? Probably not--it seems as though the usefulness of the massive herds played itself out during the first of the Governor episodes, when he managed to prove that Meghan loved him by saving her from one. After all, they literally went to war with tanks and machine guns this week, blew up all of their fortifications, and the number of walkers who appeared to take advantage was relatively small. There were some iconic moments in the story that followed the prison battle, but the biggest story beat that happened during Rick and Carl's Excellent Adventure in the Suburbs was actually something we've already seen on the TV series, so it's not going to be recycled here. That's the Lori-on-the-phone thing, one of the most bizarre turns that Rick's character took in the weeks following Lori's death...but of course it had to be re-situated because of the different structure of the TV series as compared to the movies. That is, it had to actually occur close to Lori's death; it wouldn't make much sense to have waited a full season to start hearing her voice on the other end of the phone. 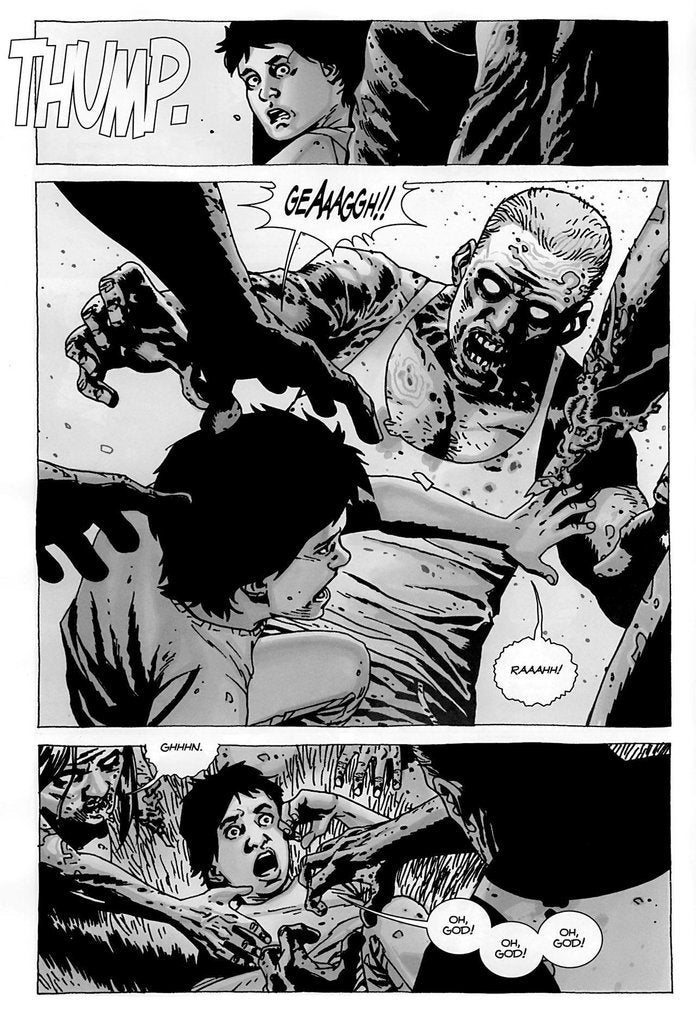 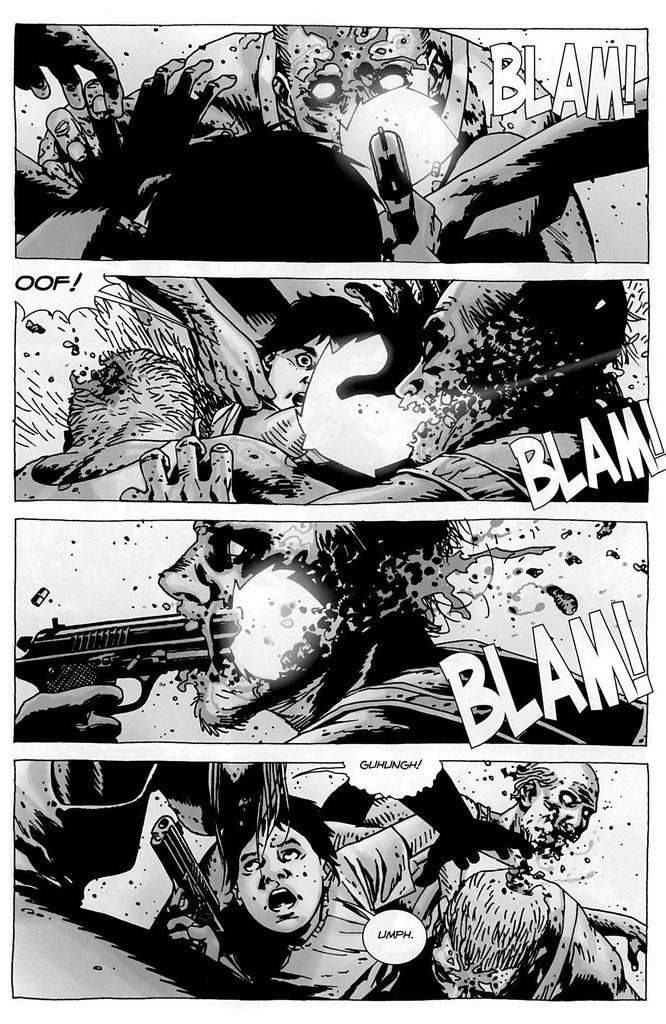 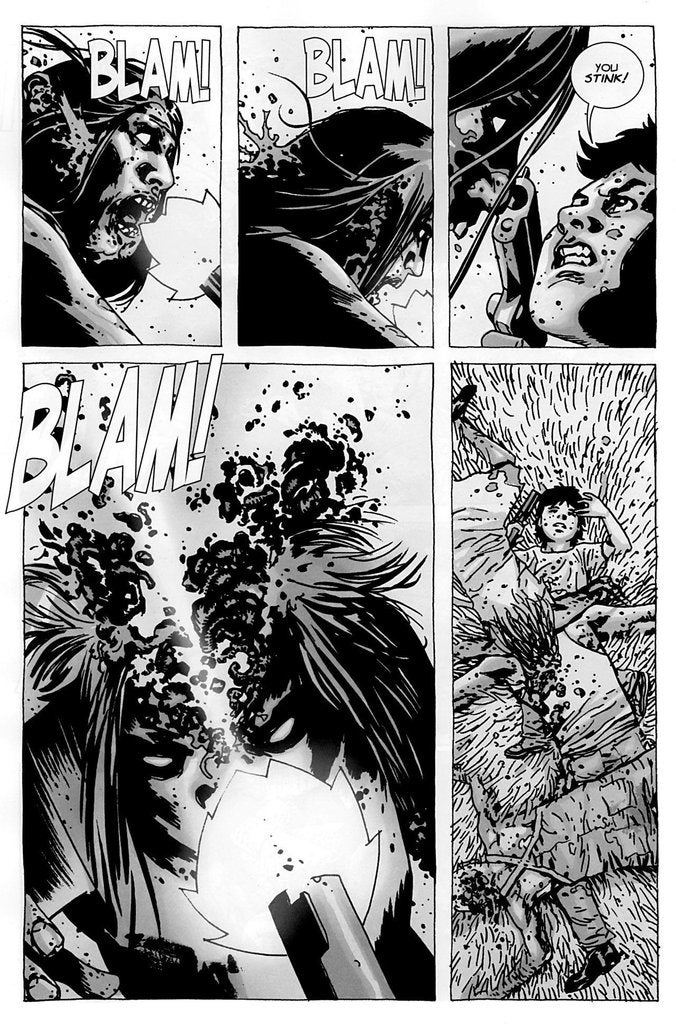