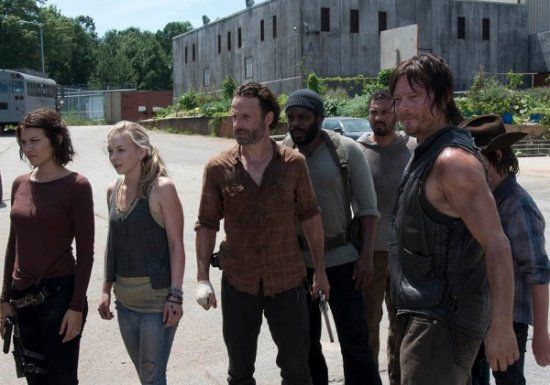 It's been clear for a while now that the midseason finale of AMC's The Walking Dead this year would be a loose adaptation of the conflict between Rick's survivors and the Governor's forces from Woodbury. Last season's finale, which had the actual Woodbury community go up against Rick's group, ended in a kind of bizarre twist when Rick's group managed to trick them all into running away and then The Governor took out his own people en masse. Ever since, it's been pretty clear that The Governor was aimed like a bullet at this  year's midseason finale, and as Robert Kirkman and others started saying that the second half of the fourth season would follow the comics more closely than the series ever has, it seemed clear that the "Made to Suffer" story arc, arguably the most popular and best-known story in the comic's history, would play heavily into the year's back half. So...how closely did the two track? We'll do a quick rundown first, and then go a little more in-depth if you're into that kind of thing. And, obviously, SPOILERS. The basics: Hershel dies either way--and so do a lot of nameless folks. Judith's fate on TV is up in the air, whereas in the comics she was most definitively dead, crushed under the fallen body of Lori, who had been shot to death. In the comics, Tyreese was used as leverage; The Governor demanded that Rick let him in, and Tyreese told Rick not to--that he was willing to die to save the rest of the group. He died the same way Hershel did here--with Michonne's sword, which one of The Governor's lieutenants had confiscated when she was briefly in their custody. Hershel seemed to have more closure than Tyreese; while Tyreese told Rick to let him die, Hershel actually seemed at peace. In the comics, Hershel died when his son was killed; he lost his will to keep on fighting, surrendered and then asked The Governor to kill him (the Governor obliged). The details: The deaths The Walking Dead Volume 8: Made To Suffer, which collects issues #43-48 of the ongoing comic book series, featured a number of high-profile deaths among the book's principal cast, as well as at least ten "extras," mostly The Governor's Woodbury soldiers, making it the highest kill-count of any trade paperback collection in the series--at least 23, although that includes one "presumed dead" and one that was told in flashback, according to The Walking Dead Wiki. Who didn't make it out of this fight in the comics? Lori Grimes Judith Grimes Tyreese Hershel Greene Billy Greene Patricia Alice Axel Brian Blake (The Governor) Bruce Allan Cooper (Flashback) Gabe Eric Jim Daniel Matthew (Assumed) Many unnamed Woodbury Soldiers. Now, we can immediate exclude the following people from consideration for the following reasons: Lori Grimes - Died in season three. Billy Greene - Doesn't exist in the TV series. Patricia - Died in season two. Alice - Doesn't exist in the TV series. Axel - Died in season three. Bruce Allan Cooper (Flashback) - Well, yeah. We probably won't get any flashbacks this week. Gabe - Doesn't exist in the TV series. A loyal soldier to The Governor, he was likely replaced by Martinez on TV, who died last week. Eric - Doesn't exist in the TV series, unless one of The Governor's unnamed soldiers is given the name Eric this week. Jim- Doesn't exist in the TV series, unless one of The Governor's unnamed soldiers is given the name Eric this week. Daniel - Doesn't exist in the TV series, unless one of The Governor's unnamed soldiers is given the name Eric this week. Matthew (Assumed) - Doesn't exist in the TV series, unless one of The Governor's unnamed soldiers is given the name Eric this week. That leaves the following list for potential deaths: Judith Grimes Tyreese Hershel Greene Brian Blake Many unnamed Woodbury Soldiers - if you replace "Woodbury" with "of The Governor's." Already, the stakes are somewhat lower in the TV series, unless they diverge from the comics and put some other people on the chopping block. There are plenty of new faces in Rick's prison (taken, ironically, from Woodbury, among other places), most of whom will almost certainly perish in the attack. Even if the showrunners have a hard time selling the network on killing the baby, for instance, you could have the implication of an off-camera destruction of the whole day care center and all the kids besides Carl and Judith. That's not how it went, though; this was a pretty tight adaptation of the original source material, except that Hershel died another way and Tyreese made it out okay (more on that below). We still lost Judith (as far as we can tell), The Governor and a dozen or so of his footsoldiers along the way.

The hostages In the comics, Tyreese was held at the gate and used as a hostage; The Governor came with a couple of guys and Michonne's freshly-acquired sword (they had captured her, but she got away) and beheaded Rick's #2 guy because Rick wouldn't open the gates without a fight. Returning to the rest of their group, The Governor claimed that Rick and his group had killed Tyreese themselves so that he couldn't be used as leverage, and that was all the group needed to hear to know there was no reasoning with a guy like that--war was on. In the TV series, it's a bit different. The tank and a contingent of armed fighters come with The Governor as he menaces Rick and company, so there's no lying to the group about how it all went down. He has Hershel and Michonne, and has them at gunpoint rather than using the sword--at least at first. The death itself, as noted above, is basically the same scenario, although the dialogue is somewhat altered to fit the situation and personalities involved. 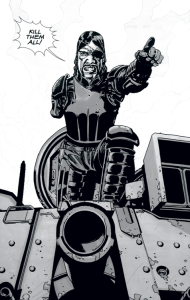 The battle "Kill them all!" the crazed Governor demands as the tank rumbles into the prison walls in the comics. It's an iconic image from the comic, and it's always been a bit hard to picture just how The Governor could command such loyalty from his people when he was clearly mad. We got the same line in this episode, but it wasn't at all the same scene. As ever, David Morrissey swapped out the maniacal nature of The Governor from the comic book source material for something a bit more reserved and made it a bit more believable, even though it's a bit jarring that nobody but Tara reacted to the fact that while they were quietly considering Rick's reasonable offer, The Governor slashed an old man's throat and war broke out. It's also worth noting that absolutely key to Rick's success in the original conflict was Andrea. Fans of the TV series may not know that everyone's least-favorite character on TV is actually a badass in the comics, the team's sniper and the one responsible for taking a number of people, including The Governor's #2 man, out of the fight. The Governor's death is also a bit different; while it's Lilly (in that case a Woodbury resident, not someone he met on the road) who kills him there, too, it's for wildly different reasons in each interpreation. Comic book Lilly, drafted into the Governor's army and forced to fire more or less blindly into the prison, killed Lori and Judith, not realizing until it was too late that the woman she was aiming for had a baby in her arms. She shot the Governor in the head, then kicked his body to the walkers to feed on and buy the rest of the surviving Woodbury Army time to make their way into the prison. 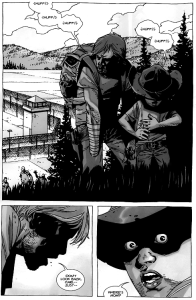 At the end, Rick and Carl still make it out over the hill and there's a similar shot of the ruined home they'd made for themselves--Rick still tells him not to look back, but in that case it's because Carl wasn't aware until just that moment that he'd just lost Lori and Judith. The insider In the comics, Alice had defected from Woodbury after The Governor raped Michonne and mutilated Rick, earning himself an even more dramatic mutilation in the process once Michonne got her sword back. She'd been at the prison for a while and had assisted Lori in giving birth just before the siege. Buried deep inside the prison to protect the child, she positioned herself next to Lori, with a rifle to her head, in case any of the Woodbury Army came crashing in. The idea was that they could pretend she'd been working with The Governor all along and earn themselves a reprieve. That, of course, is something that some fans expected to be revisited in a way, given that earlier in the season there was that plot beat of somebody feeding the walkers in hopes of getting them to swarm the prison. What came of it? Well, nothing yet--although it seems as though the same person who was feeding the walkers was also dissecting rats for fun, which is something that calls back to a particularly disturbed young boy in the comics who had a fascination with the walkers and with the kind of science of reanimation. He's not somebody who exists on TV, but Lizzie could easily enough stand in for him. Or, they could say it was Carol. Or, whoever it was could have died of the plague or been killed in the attack and we'll never know what that was all about. But given the fact that Tyreese was just committed to getting to the bottom of things, it seems unlikely it'll be dropped right away.

The Walking Dead Midseason Finale: Side-By-Side Comparison With the Comics