WARNING: Major spoilers ahead for both the second season of AMC's The Walking Dead and for Robert Kirkman's Image Comics series by the same name. Don't say you weren't warned.

With this week's shocking midseason finale on AMC's The Walking Dead, fans of the comic have found themselves scratching their heads and wondering to themselves, "Is it still The Walking Dead if Shane outlives Sophia?" The answer, of course, is yes but as a longtime reader I've got a more specific question in mind: What if some of the surprising deaths in the TV show are meant to fulfill the same thematic purposes as unrelated comic book deaths? Does that mean that the likelihood increases of some long-gone comics characters to survive not just longer than you expect (we're looking at you, Shane!) but indefinitely? 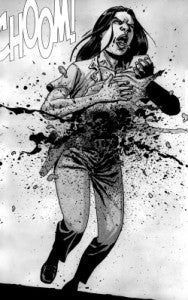 It's been said by fans that the death of Lori and Judith Grimes in the fourth year of the comic book series was a key moment that proved "no one is safe" and that anything can happen, even to characters who are cherished by the readers. This week's appearance by undead Sophia serves much the same purpose, taking all the air out of our characters and forcing Rick to step up in one of the worst situations imaginable. It would almost seem, with the trauma her unexpected end brings to the characters and the audience, that killing Lori and her newborn daughter would almost be redundant, unless something happens between now and then on the show that makes fans lose sight of the fragility of life in the world of The Walking Dead. That, too, seems less and less likely given recent reports that at least one actor has seen their character written off the show after showing a little too much loyalty to ousted showrunner Frank Darabont. Many fans have predicted that the character in question would be Dale, played by frequent Darabont collaboator Jeffrey DeMunn. Again, the end of Dale so soon would have to be a shock to longtime readers of the comics and to newer viewers alike, shocking everyone out of complacency and reminding us that no character is truly beyond being offed. Lori and Judity would also allow the showrunners to explore the problems that have already been hinted at of trying to survive in a world where every time the baby cries due to teething, it could attract walkers from all over the surrounding area and put the group in grave risk. What do you think, readers? Could Sophia really just be a trade against new storylines in the future?

The Walking Dead: More Deaths or Just Different Ones?