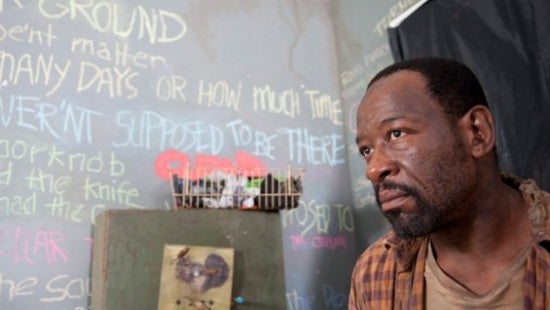 During Season 4 of The Walking Dead, there were reoccurring rumors that Lennie James' character Morgan Jones would return. The last time Morgan was seen was during the Season 3 "Clear" episode, and every time that Rick's group gets into trouble, rumors seem to surface that Morgan will pull off some type of dramatic rescue. During an interview on Larry King Now, The Walking Dead showrunner Scott Gimple definitively addressed the issue of if Morgan would ever return to the show. "I am so determined to make that happen by hook and by crook that I can say definitively 'yes,'" said Gimple. Gimple didn't specify exactly when Morgan would return, noting that "time and tide can get in the way." Could we finally see Morgan pull off the dramatic rescue that fans have been expecting in Season 5? We're sure that Gimple's comment is likely to set off speculation that Morgan plays a role in saving Rick and his group from the residents of Terminus.

The Walking Dead: Morgan Will Definitively Appear On The Show Again