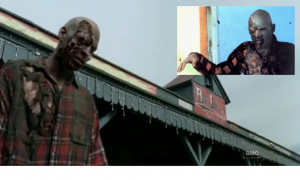 Remember when we wrote about the "airport zombie" from George A. Romero's Dawn of the Dead appearing on AMC's The Walking Dead last season (we even talked to the actor)? Well, not only is that not the only time they've had a little fun with "tribute walkers," but there's more to come, according to Emmy-winning special effects artist Greg Nicotero. "I loved doing that, too," Nicotero told us of the Dawn of the Dead zombie. "And it was funny because I put it in a shot that couldn't get edited out. I went to the wardrobe people, I said, 'Okay, here's a photo--this is a zombie from Dawn of the Dead. This is my little nod to George Romero, my little tribute.' And the fact that we tracked all the way out of the bar with him and he goes up to the car with Merle sitting in the car--only like five people got it but some of the prop guys came over and were like, 'Is that the zombie from Dawn of the Dead?' I'm like, 'Maybe. Could be.' It's fun. I love throwing those little things in." And, while he's been somewhat less successful in getting his into the show, it's not that Norman Reedus hasn't tried, either. "Those little tribute walkers--I throw them in just for myself and for the fans. You know, one of the heads in the Governor's man cave--all the heads in the tanks?--we did a recreation of Ben Gardner's head from Jaws is one of the heads in the Governor's tank," Nicotero told reporters after the AMC's The Walking Dead panel at Comic-Con this weekend. "And it's funny because AMC did a little--like a license, like a Walking Dead wallet and the head's right there. I was like, 'Hey, look!'" He said that he isn't quite done with those types of jokes, yet. "We did a couple this year already," Nicotero said. "We did one walker that's got a little Mario Bava/Black Sabbath feel to it. I love throwing that stuff in there. It gets my guys all juiced up because they love the tribute zombies. I don't know--Jack from An American Werewolf in London could show up. You never know!" 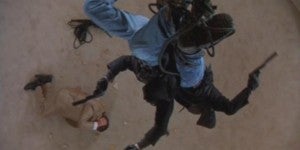 You know what else might get a nod on the show, if Reedus can make it happen? The Boondock Saints. "You know what I did?" Reedus said, "It got cut, but when we were in the car last season, and we're driving--we come out and he hears the phone call? I picked up stuff--I picked up a bunch of rope, wondering if people would pick that up. And it got cut out, but there was a thing which I don't even know if I told anyone." Nicotero noted that the scene in question--wherein the characters were at a National Guard checkpoint or depot--was cut in its entirety, so it's not likely anyone was intentionally keeping Reedus's joke out of the episode. We can only hope he find another opportunity... ...You never know what you're going to need rope for, after all.

The Walking Dead: Norman Reedus and Greg Nicotero's Boondock Saints and Dawn of the Dead Gags

Cyberpunk: Edgerunners Cosplay Shows Off Why Lucy's So Popular