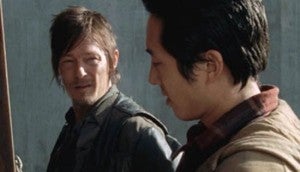 In order to support this week's release of The Walking Dead Season 3 Blu-ray and DVD, Steven Yeun has been making the interview rounds. Of course, the topic of his popular co-star Norman Reedus came up, and Yeun had some kind words to say. In an interview with Access Hollywood, Yeun said, "He's just such a nice guy and he's also realistic, and if women are hoarding him, then he's just going to take it in stride. He's a really chill dude." One of the nice things that Reedus did was he autographed a bunch of bananas one day at the Craft services table, and it seems the bananas became quite a popular item. Yeun said, "I think Norman is the only one on our show who could sign a banana and have someone fight to get that banana." However, Yeun doesn't mind playing second banana to Reedus. In an interview with AV Club, Yeun relayed that a lot of people often tell him that he is their second favorite character. Yeun explained, "It's second place; I'll take second place if it's next to Norman Reedus."