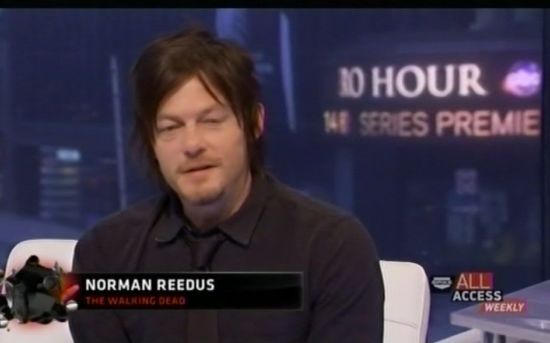 Norman Reedus, who plays Daryl Dixon on The Walking Dead, appeared on tonight's All Access Weekly on Spike TV. Host Katie Linendoll asked Norman Reedus what the craziest fan interaction he has had to date was, and his answer provided us with the awesome headline above. Reedus said, "Wow, one girl sent me her breast implant, that was pretty wild. I use it as my phone cradle in my trailer." Reedus also added, "Yeah, and I got a bag full of squirrel meat once. She said I hunted it down with a shovel, which was pretty impressive I thought." When asked about insight on season three, Reedus said, "Well, I feel like AMC is tracking me from space, so if I say the wrong thing I'm going to get shot from a satellite." In describing Merle, Reedus said, "He's sort of like your drunk uncle at a Christmas party. You can't take him anywhere. He's stepped on a lot of toes, so there's going to be a lot of inside conflict. There's also Daryl become a little brother when Merle's around, so there's that sort of prison inside this prison inside this zombie prison." As far as advice if a zombie apocalypse really happened, Reedus said, "If that happened, I would probably just like check into the top floor of the Four Seasons and watch South Park until I died." Of course, the funniest part of the interview might have been the blooper outtake, check out the awkward but hilarious question that host Katie Linendoll asked Norman Reedus. The Walking Dead mid-season premiere airs on Sunday, February 10, 2013 starting at 9 PM ET on AMC.

Godzilla Will Return This Year With New Short Film

PS5 Gets Second Mysterious Update in a Row