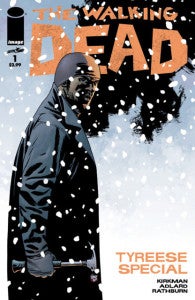 With the return of AMC's The Walking Dead this weekend, fans got a look at a special one-shot revolving around Tyreese, the long-dead character from the comics who has just joined the cast of the TV series and seems pointed in a very different direction than his printed-page counterpart. Tyreese, who appeared a little bit during the show's third season last year, is poised to take off this year, with a substantial role in the first two episodes of the new season. With his character not appearing regularly in the comics, Kirkman acknowledged that it helps to print the character-centric one-shots (previously there were similar books printed for The Governor and Michonne) "so retailers have something on their shelves for fans of the show when that new character is introduced." And, he told an audience at The Walking Dead panel at New York Comic Con, there are more of them coming. Unfortunately, Kirkman said he can't reveal who's next without potentially giving away upcoming plot points in Season four...but there may be hints at tomorrow's panel, which is TV-centric. A good bet might be Abraham or someone in his group, since those characters are in the process of being cast. It sounds as though they'll be big players in the second half of season four, so a one-shot slated to line up with the midseason premiere wouldn't hurt anybody...! The Walking Dead Season Four debuts on AMC Sunday at 9 p.m. The Walking Dead #115, out this week, features the start of a major, biweekly, 12-part storyline announced at San Diego Comic Con International this summer.