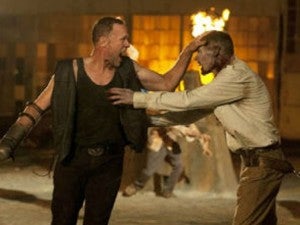 In a shocker, AMC announced today that showrunner Glen Mazzara would be leaving The Walking Dead after season 3. The announcement comes as a huge surprise, because season 3 had been off to a great start. As for as the reason why Mazzara was leaving, the official statement said, "Both parties acknowledge that there is a difference of opinion about where the show should go moving forward, and conclude that it is best to part ways." Of course, this statement leaves Walking Dead fans to speculate about what that difference of opinion might have been and what it means for The Walking Dead going forward. One possibility that was hinted at earlier this season could be that Mazzara wanted to keep the show realistic and was concerned over the number of fantastical elements being introduced from the comic book series. In discussing the arena fight scene on The Walking Dead, Mazzara said, "This was a major part of the comic book. One of the challenges this year is that as we introduce elements from the comic book, we want to keep the show realistic, authentic, rounded. We don't want it to tip over into a fantastical world. So we were worried about those arena fights. Was it going to feel too heightened? Too outside what we actually do." Even though Mazzara went on to say that actual scene turned out pretty well, one has to wonder if it could be a hint at what the difference of opinion between him and AMC might have been. Given the success of season 3 so far, AMC might be pushing to go more into the fantasy elements from the comic books, while Mazzara might have wanted to keep the show more grounded and realistic.