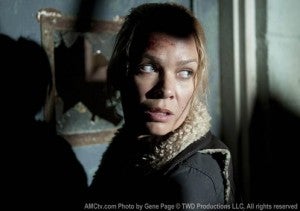 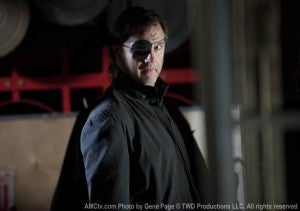 By the time the Governor comes to the door, Andrea is in another room; he starts to whistle, attracting the attention of a walker hiding in the shadows that Andrea has to kill, the sound of which gives him a sense for her direction. Eventually, he stands on the other side of a dividing wall from her, trying to convince her to come out; when she won't, he picks up a shovel and starts to smash the glass portions of the walls above her head (the building seems to be a factory or maybe a meat-packing plant where management had offices with large windows at head level to see out onto the floor). Andrea runs as quietly as she can when the Governor is distracted, hiding in an area small enough that he can't reach it with the shovel in hand. It's a sound plan, except that he hears a noise in the distance and again starts whistling to attract whatever it might be. He gets very close to Andrea's hiding spot but a distant crash lures him away. It's a walker, which he impales on a piece of nearby machinery, then shoots two more, finishing one off with the shovel. As he does so, Andrea keeps moving through the building, arriving near an exit; a walker jumps out at her and she impales it on a nearby meathook. Nearing what looks like an exit, she opens a door onto a stairwell, where about a dozen walkers are waiting; she immediately closes it, and the Governor approaches her, confident he's got her cornered. Rather than go back with him, she opens the door, hides behind it against the wall and lets the line of walkers descend on the Governor. As he runs out of bullets and struggles to keep them off of him, she leaves. Back at the pickup point for the walkers, an unseen figure douses the walkers in the pit and those that Ben, Allen and Martinez have loaded onto the trailer for use against Rick with gasoline, then lights them on fire. In the woods, Andrea isn't in good shape when she finally reaches the prison. Rick is standing watch, and as she tries to call out to him, her voice is hoarse. Instead she tries to flag him down with her arms, but the Governor tackles her; Rick sees the movement and points his rifle in their direction but they're already out of view. At the pickup point, Bowman realizes that the walkers have been sabotaged; word gets back to Martinez, who tells the Governor when he pulls in. The Governor denies finding Andrea, but won't open his truck window all the way. He asks whether Martinez has any suspects, and Martinez fingers Tyreese; the Governor asks to see their group. When Tyreese expresses concern about the use of walkers as an offensive weapon, the Governor tells him that they're a scare tactic, a bluff, not meant to be used. Tyreese asks why Martinez didn't just clarify that with him, and the Governor tells him that Woodbury isn't comfortable sharing their tactics with relative strangers. He seems fairly satisfied with that answer, telling the Governor that he still wants to stay in Woodbury and that what happened at the pit won't happen again (he's talking about fighting with Allen). When the Governor asks him where he got the gasoline, Tyreese's genuine confusion tells the Governor he isn't the guy. Outside, he's met by Milton, who says it's too bad about the walkers being sabotaged, and asks whether the Governor knows who did it. The Governor says that yes, he knows, and leaves. Back at his torture dungeon, Andrea is chained to a chair with her mouth duct-taped shut.