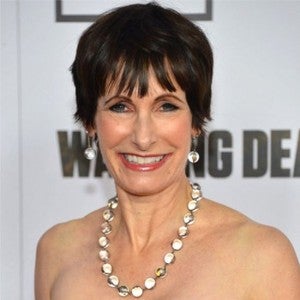 During the Produced By Conference in Los Angeles earlier today, AMC's The Walking Dead producer Gale Anne Hurd told those in attendance that one of the odder aspects of her job on the massively-successful TV series is that fans take to social media with death threats when one of the characters is killed. "That's one of the dirty little secrets of social media," Hurd said, according to Deadline. "The fans so identify with the characters that if you kill them off… well, first they're in denial. It's really the stages of grief. They say, 'That gunshot off camera, they aren't really dead, they're coming back.' And then they get angry. They threaten to hunt you down. They don't understand the difference between reality and fantasy." It's interesting because the example she uses seems to be of Lori Grimes--a not-particularly-popular character, and one that many fans dreaded seeing back if in fact her death had turned out to be a misdirect. Even her apparition, appearing to her deranged and grieving husband, was enough to get some fans' ire up. Executive producer David Alpert also took the stage, telling the audience that one of the most frustrating experiences of the whole process was just getting the series--the rights to which were snapped up by NBC in 2005, but rejected at the pilot stage--off the ground. "We want to do something totally different," Alpert said the NBC executives told him at the time. He added, "When they passed, I said, 'But I thought you wanted to do something totally different.' They said, 'We do. We just don't want to do a zombie show.' That was one of the more frustrating things."

The Walking Dead Producers Got Death Threats After Character Death