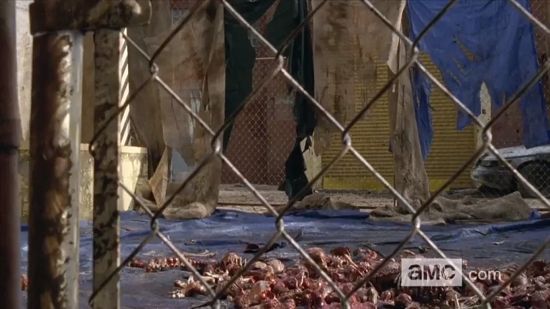 For weeks now, fans and reporters have been speculating that Terminus is not in fact a safe haven. And, yeah, we learned that was definitely true in tonight's episode of AMC's The Walking Dead. We've also been speculating that Terminus would be full of cannibals, playing on either the "Fear the Hunters" storyline in the comics or the "Starved For Help" episode in the Telltale Games series. 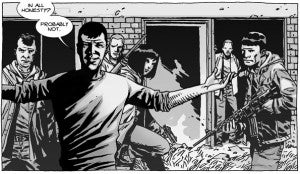 The Hunters were a roving band of cannibals, were headquartered out of an isolated, rural house in the comics. They would stalk, trap and kill other survivors for their meat, eating them slowly and putting tourniquets on their wounds so that their victims would last longer in a world without refrigeration. Keeping their victims alive as long as possible also had the added benefit of preventing them from reanimating before the meat was off the bone. That's important. Remember that for later. The cannibals of the St. John Dairy Farm, meanwhile, "feel" a bit more like the Terminians because they lure people into their web rather than pursuing people in the outside world. 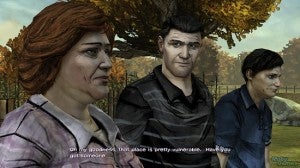 A number of fans in our comment threads and on message boards around the Internet have noted that Mary from Terminus bears a passing resemblance to Brenda St. John, the matriarch of a family of cannibals operating out of the St. John Dairy Farm. She and her family are characters original to the games, who appeared in Telltale Games' The Walking Dead: Season One episode "Starved For Help," and seem much likelier candidates to be the denizens of Terminus than do The Hunters. Aside from the fact that, like Mary, she's a slightly-older-than-middle-aged woman who's kind and welcoming to strangers, there's the fact that the St. John Dairy Farm cannibals operate out of (wait for it) the St. John's Dairy Farm. It's a single, central location for their operations and rather than hunting people and then taking victims back home as the Hunters did, they allow people to come to them. 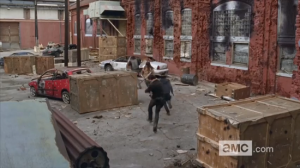 So in tonight's episode, what happened? The Terminians fired down on Rick, Daryl, Carl and Michonne from the rooftops, and as Michonne and Daryl noted, they weren't trying to kill them but were firing at their feet. they drove the group through a path which, if you've ever done it before, is oddly reminiscent of The Walking Dead Escape, the zombie-themed survival obstacle course Skybound throws at San Diego Comic Con and elsewhere around the country. In any event, they were driven through the trap, just as Rick described it to Carl at the start of the episode.

(You can see the video below, courtesy of AMC.) Along the way, there were a few things to watch out for -- and we'll certainly look at some of it more down the line -- but as far as all that speculation about cannibalism, there were a few things. First of all, there were three railroad cars, apparently loaded with people. that's where the cries for help are coming from, and don't be surprised if those characters come into play down the line. Secondly, and more key, is the image at right, which is an enhanced version of the image above. It's difficult to see in any kind of detail, but there are shapes in that pile of blood and bone that fairly clearly look like human craniums. Unless somebody somehow managed to find some apes in Georgia in the zombie apocalypse, it seems those backbones and skulls are probably human. The camera lingered on them for a long moment, too, while the survivors made their way offscreen. It's hard to say whether Rick and his group actually noticed that pile as they made their way through the obstacle course or not. Certainly it seems notable that the color of the blood on the bones isn't the dark, decaying color we generally see on walkers. That could explain why they weren't shooting to kill; you don't want to accidentally kill somebody who then turns inside the train car and suddenly you're opening your "refrigerator" for a snack and you've got a group of bloodthirsty zombies going at you. There's also just the idea of "tainted meat." That would also explain why they don't put a bullet in anybody right away, and why even when their lives were potentially in danger, they didn't take a shot at Rick and his group. Of course, the question now becomes whether the Terminians will eat Alex, the "tour guide" who takes the bullet just before they start their journey through the A path.

The Walking Dead: Proof Terminus Is Filled With Cannibals