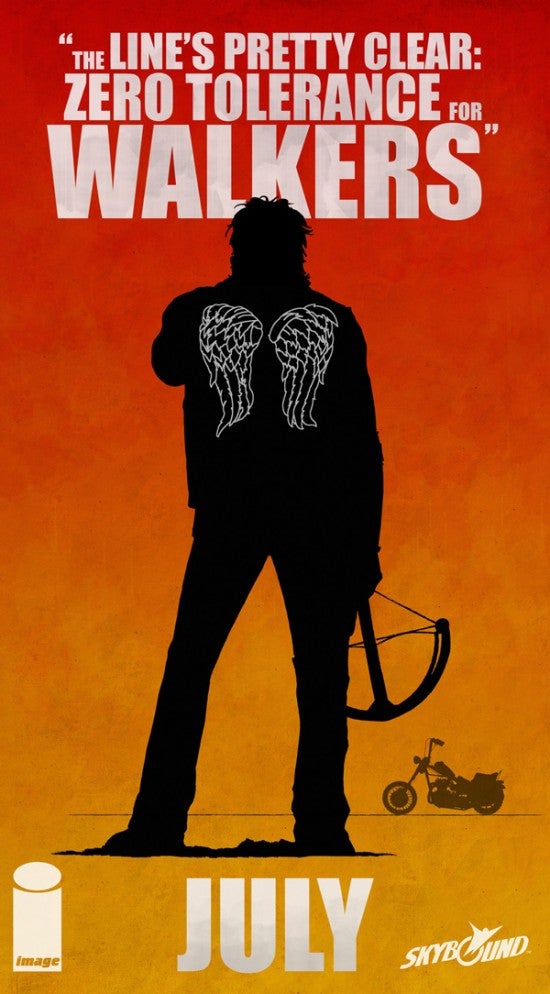 In what appears to be an elaborate April Fool's Day joke directed at AMC's The Walking Dead star Norman Reedus, Skybound Entertainment -- the Image Comics imprint responsible for publishing the comic book on which the series is based -- are teasing the introduction of Reedus's fan-favorite character Daryl Dixon to the series in July. Featuring art by series artist Charlie Adlard, the official website for The Walking Dead comic books features the following solicitation text and cover, while the tweet below (featuring the image at top) was directed at Reedus, who has frequently said he'd like to see Daryl added to the comic book cast. (They also created both trade-dressed and undressed copies of the art, along with a black-and-white version which, you'll notice further down, is a bit of a giveaway.) THE WALKING DEAD #129 STORY: ROBERT KIRKMAN ART: CHARLIE ADLARD, STEFANO GAUDIANO & CLIFF RATHBURN COVER: CHARLIE ADLARD & DAVE STEWART JULY 16 32 PAGES/BW/M $2.99 Enter Daryl Dixon. 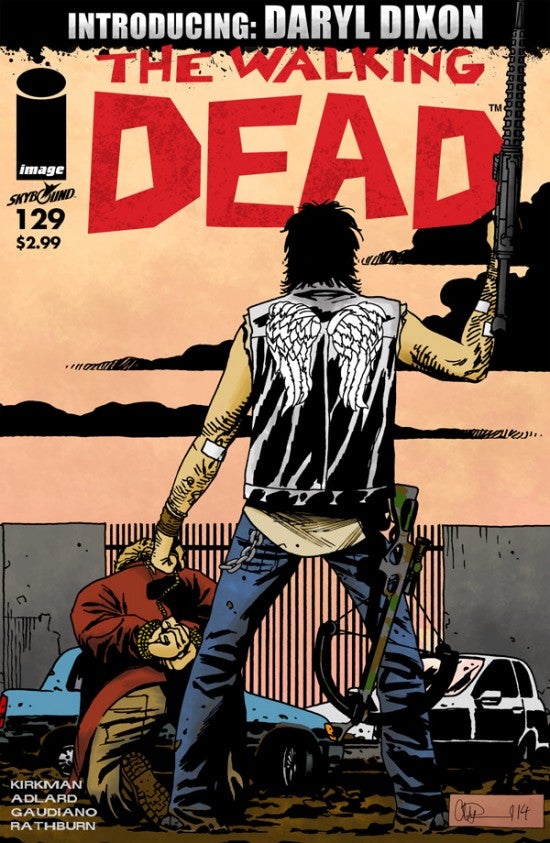 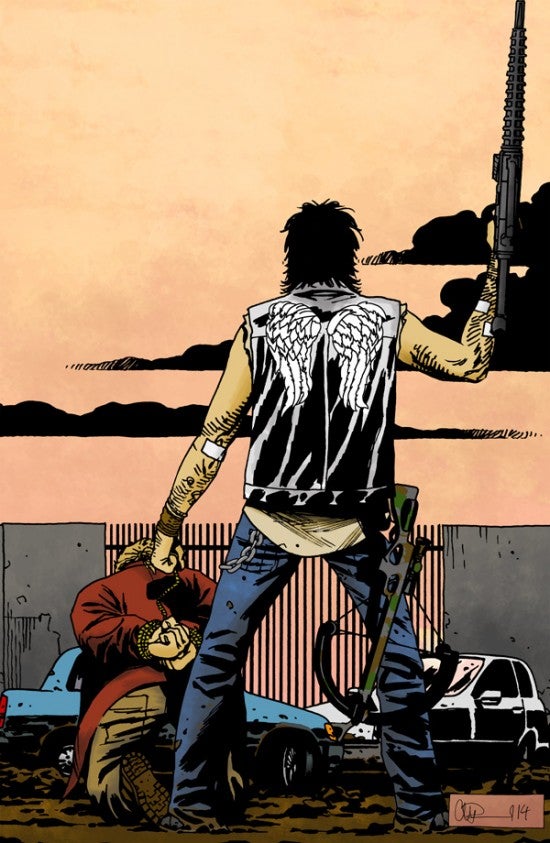 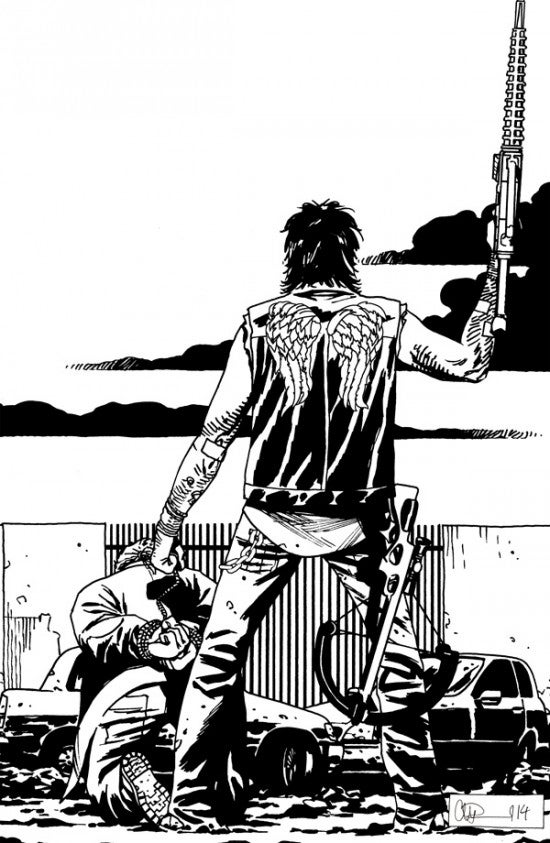 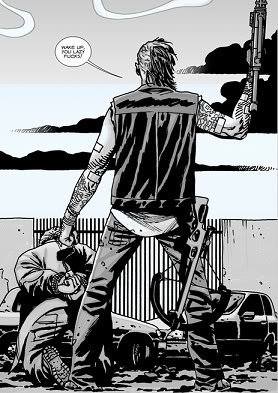 The publisher is really driving the message home, with a number of tweets and social media mentions, even seemingly creating a backdated blog post to say they "teased it last week." But the very obvious nature of the tease coupled with the fact that the "old" blog post has zero comments more or less outs it as something manufactured today (Skybound's The Walking Dead commenters are prolific). The image seems to be a reworked version of a shot of Dwight, one of Negan's Saviors, from The Walking Dead #98. You can see that image at right. When Dwight first showed up, fans wondered whether a new, crossbow-wielding, vest-wearing character might be the comic book version of Daryl -- an idea that went by the wayside pretty quickly when they got a look at his half-burned-off face. During San Diego Comic-Con, The Walking Dead creator Robert Kirkman was asked about the possibility of eventually putting Daryl Dixon in the comic books. Unfortunately, Robert Kirkman said that he likes the fact that certain characters are unique to certain mediums, and he has no plans to introduce Daryl Dixon in The Walking Dead comic book series. Comicbook.com caught up with Norman Reedus for an exclusive interview not long after that, in which he reiterated he'd love to see his character make the jump from the screen to the printed page. Reedus said, "Of course I would love to be a part of the books and I've joked around with Robert [Kirkman] begging him to put me in, but he's the creator and really knows what's best for the stories. They are so intricate and vast I can't even wrap my head around what that's about really, to create such a unique world like that, so I'm following his lead. I'm really happy with where I'm at if you know what I mean." A few months later, Kirkman was pinned down on the question at Amazing Arizona Comic Con. Kirkman said, "I guess it wouldn't be a bad thing if Daryl Dixon showed up in the comic. But I don't know. I really like the separation. I like that when we sit down to write the show one of the first things we deal with is: 'How does Daryl Dixon change this story?' Because we always start from: 'Ok, we like this part of the comic. How are we going to do it?' Kirkman continued, "And it's just always interesting to get in there and be like, 'Oh, well his existence and the fact that his personality is this, and he would behave this way, means that he would react to this person differently than this and differently than that.' And it's just really a great thing for the show that he doesn't exist in the comic. And I really like that." Then, Kirkman added, "But yeah, I don't know. It would be cool if he was in the comic, but I don't really have any plans on doing that. But I guess he would be the one if I was going to pull any character from the show into the comic, it would be him. Mostly just because I love Norman [Reedus]. Handsome dude." Regarding the original tweet about "making his dreams come true," we can only assume that we know Reedus's reaction to the gag: 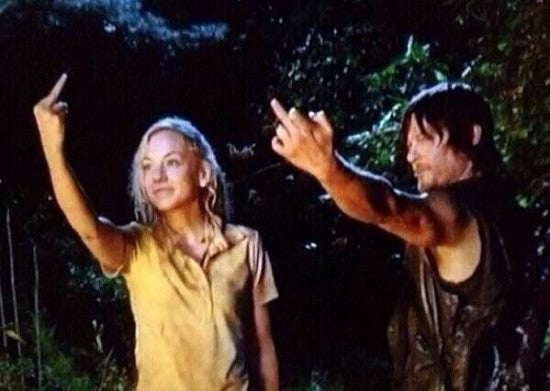