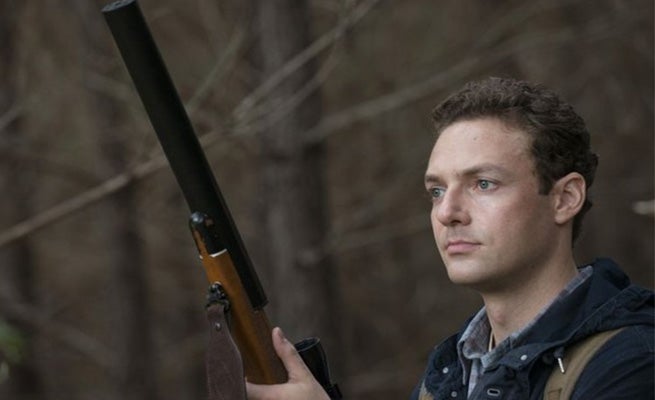 Sasha stares at a picture of a happy family riding in a car and other happy people framed around the room. She sits up from her bed on the floor. The sun is rising. Sasha walks into a house with Olivia talking about her old job. Sasha goes straight to the guns. Olivia asks for a leg from a boar if Sasha should kill one. Sasha is caught off guard, but agrees. Sasha exits the gate.

Sasha sets up the picture frames on a tree stump and walks away. She controls her breath and aims down the sights of her gun and shoots down a picture frame then looks around. She raises her gun again and shoots another frame down then looks around again. She hears something but raises her gun and fires again. She looks around more frantically as the sound of birds ensues. She takes down all the pictures hurriedly to the sound of walkers and sits on the tree stump. She whispers, "Come and get me."

Two walkers lay on the ground shot in the head. Rick, Carol and Daryl search for another. Carol is dressed quite nicely, and Rick is in his constable uniform. Daryl is still in his typical get up. They are discussing their need for guns and Rick says the community is lucky to have them now. They continue to talk about the missing gun and who could've taken it. Carol shoots down a walker with 9 shots to show that they were out shooting when they get back.

Daryl notices a "W" carved in the walker's head. They analyze it quickly then leave.

Michonne tries on a police uniform. She uses her sword to cut excess strings. Rick enters and discusses the distribution of authority so quickly upon their arrival. Michonne still has a positive outlook and faith in Deanna and how smart she is. Rick wonders if she is "smart for then, or smart for now."

Daryl walks through the woods, alone. He raises his crossbow and yells, "Come out!" Aaron exits the bushes with his hands up. Aaron asks if Daryl can tell the difference between walkers and humans by sound but Daryl doesn't answer. Aaron goes on to ask if he can tell the difference between a good guy and a bad guy. Daryl asks why Aaron is following him. Aaron just asks to join him.

Deanna guides Michonne and Rick on how to be constables. She says they'll listen because they believe in the community. She tells them they got the jackets from a police officer who used to work there. Maggie will work with Deanna. Deanna sees commerce, industry and civilization here at the community. Maggie believes in it while Rick seems skeptical, but says he does. He wants to talk security.

The group walks along the walls by the solar panel. Rick wants a constant outlook at the walls not just for damage, but because people outside are dangerous. Sasha approaches and volunteers to be a lookout in the clock tower. Deanna says there is no lookout in the tower. Rick says they need one immediately and Michonne agrees. Sasha says she'll take those shifts, as many as possible. Deanna says she will put Spencer up there and consider Sasha for the primary lookout, but she wants the group to come to the welcome party.

Carol talks with the ladies of the community about recipes. Rick walks home and Carol leaves her friends to talk to him. Carol asks if he's heard about the party. Rick wants to use it to slip out. They can't use Daryl because they will be watching him. Carol says what's great about this place is that she can be invisible again.

Daryl and Aaron walk through the woods and find a horse. Aaron has been trying to catch him for months, his name is Buttons. Aaron says he hasn't seen him for a while and starts to prepare a lasso to catch it. Daryl takes the rope and approaches the horse cautiously. He talks to the horse gently as he gets closer. Walkers come out of the woods and scare the horse off. Daryl and Aaron put them all down and pursue the horse.

Carol and Olivia enter a kitchen. Carol jokes about her recipe, saying a girl has so many secrets. Tobin wants to "make a withdrawal," to check a few things out before the party. Olivia shows Carol that they have portioned chocolate. Carol takes her quarter bar. Tobin asks Carol if she is afraid of guns and she tells him that she's not an expert. Tobin offers to teach her.

Aaron and Daryl continue through the woods. Aaron tells Daryl he knows he's feeling like an outsider which he can relate to. He and Eric have felt outside even though they have been exposed to well meaning but mean, stupid people. He acknowledges that they're scared of the two of them for different reasons, but less of Aaron because they know him. He tries to encourage Daryl to let people get to know him. Daryl says he has nothing to prove. There's a lot of bad people out there and they weren't afraid of anything.

Rick, Carl, Judith and Carol go to Deanna's party. The community is there mingling. Deanna envies Judith because she'll get to see what the community will become. Abraham and Rosita enter the party. They're uncomfortable. Abraham is persuaded by beer.

Rick is introduced to Deanna's husband, Reg. Reg tells Rick how remarkable he is and Rick deflects by complimenting Reg's wall. Reg says its just a wall while Rick has protected 14 people. Rick chooses not to drink although offered, then changes his mind and has some rum. Jessie and her family enter, catching Rick's eye.

Daryl and Aaron pursue the fleeing horse. Aaron is tripped up by a walker so he cuts its hand off. Daryl stomps its head in and smashes another walker on it. Aaron gets up and shoots down an approaching walker. The horse is swarmed by walkers who start feeding on it. Aaron and Daryl close in to put them down.

The walkers are dead but the horse is suffering. Aaron puts it down. He says the horse always ran. Daryl tells Aaron he was trying to help. The two leave the dead walkers and horse.

Noah is alone at the party. Glenn and Maggie say hi. Noah says it's not really his thing and he wants to head out, but Glenn says they're all there together. Maggie tells him that he is there with family. Daryl looks at the party from outside the house and walks past it. Aaron comes outside when Daryl is in front of his house. Aaron appreciates Daryl's consideration for going to the house and invites him inside for spaghetti dinner.

Olivia arrives at the party. Carol tries to avoid her. Jessie introduces Rick to her husband Pete. He offers Rick to come by his office and give him a check-up. Jessie offers to get Rick a refill but Pete assertively tells her he's on it. Jessie and Rick make small talk and observe the people being "ordinary like before." Jessie talks about the positive effect that the end of the world has had on people by bringing them all together despite all of their losses. Carl hangs out with the young boys and wins bets. Rick is happy to see it.

Jessie's youngest son, Sam, runs up and says there are no cookies. Rick assures the boy that he'll make sure more cookies come but Sam says that Rick doesn't have a stamp. Rick happily accepts a stamp on his hand.

Sasha knocks on the party's door. Spencer opens the door and introduces himself as Deanna's son. Spencer suggests Sasha stay with him but she walks away.

Daryl sucks down pasta at the table with Aaron and Eric and talks with his mouth full. Eric suggests Daryl bring back a pasta maker for Mrs. Neidermayer and then realizes he's talking too much which is acknowledged by Aaron. Eric suggests they "ask him." Daryl walks into their garage. Aaron explains that he has thought about using the parts that are scattered to build up a bike. Aaron tells Daryl he'll need a bike. He goes on to say that he wants Daryl to be a recruiter to keep Eric out of danger. He persuades him by saying that he's "good out there," but he "doesn't belong out there." Daryl starts to uncover the bike. Aaron says the main reason that he wants him to recruit is because he can tell the difference between a good person and a bad person. Daryl agrees by saying, "I got nothing else to do. Thanks."

Michonne looks at the plastic sword in her drink. Abraham comes behind her and jokes about the steel of her sword. He goes on about wanting to not use it again but not forgetting how to use it. Michonne asks how much he has had to drink. Abraham laughs and acknowledges he has drank a lot. He tells Michonne he realizes things have worked out pretty well for him. He asks her what she has done. Michonne tells him she put on the dress. Abraham says try again.

Carol lurks around the kitchen where the food and weapons are. She takes another piece of chocolate and then a bag and starts filling it with guns. Sam walks in and asks what she's doing. He says he followed her in hope of finding more cookies. Carol says she'll make him a whole batch if he keeps it a secret. She tells him that he can't even tell his mom because if he does he'll wake up tied to a tree, far, far away, so far that if he screams no one will help but the monsters will come. She tells him they'll tear him apart while he's still alive and he'll feel the whole thing and afterward no one will know what happened. Or he can just not say anything about what happened there and there will be cookies- lots of cookies. Sam is terrified.

Jessie approaches Rick holding Judith. Rick tells her that Judith and Carl are why he's still there. He understands now, that being in the community isn't that bad. Judith starts moaning and Jessie hands her over to Rick. The two have an intimate face to face moment and Rick gives her a kiss on the cheek. She is a bit giddy as she walks away.

Deanna tries to get Sasha to mingle with the girls. The women talk about coffee and issues that weren't important to her previously. One woman asks Sasha what her favorite meal is but Sasha doesn't know. Sasha flips out when the woman says she should be worried that she'll cook something Sasha hates.

Sasha stands by the gate staring outside. Deanna can't figure out what it is. Sasha says that the community isn't real but Deanna says that's bulls—-. She opens the gate for Sasha who exits, then closes it.

Carol opens up her bag and offers guns to Daryl and Rick. Daryl suggests that they don't need the weapons. Rick hesitates but takes one. Daryl doesn't.

Michonne hammers nails into the wall to hold up her sword. She slowly places it above her fireplace beneath a piece of art. Rick, Daryl, and Carol reenter through the gate and all go separate ways. Jessie says hi to Rick as she walks with Peter who puts his arm around her. Rick clutches his gun and walks away. Rick hustles between his house and the house next door still clutching the gun. He hears a walker on the other side. He puts his hand on the wall and stares.