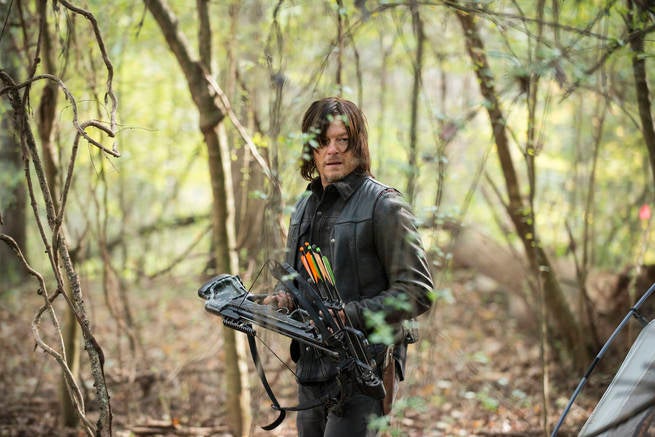 Last week's episode of The Walking Dead left off with Rick and Carol deciding that Pete Anderson, resident doctor in Alexandria, had to die. This week will likely see Rick address Deanna and Pete on the issue and follow up with Aaron and Daryl's relationship as recruiters.

We'll be updating the events of tonight's episode titled "Try," live, below.

It's night. A walker steps out of the woods. Inside, Deanna looks at a CD with the title Run Mix written on it, alongside Reg and Spencer. She plays it and the rom reminisces. Carol prepares dinner at her house as the song plays. She watches Judith on a monitor and Sam looks at her through the window. Sasha looks out from the bell tower. The walker continues out of the woods toward the gates. Inside, Reg tears up and has Spencer turn the music off.

There's a knock on the door. Deanna answers but no one is there, only a letter from Carol reading, "We're sorry for the loss," on top of a dinner plate which Deanna leaves on her porch. Deanna goes inside and ignites the note on a candle.The walker presses against the wall and Sasha guns it down. Further out, another walker is killed by Aaron who is with Daryl. They see a light.

Nicholas is on camera describing what happened, blaming Glenn for what happened. He says Glenn distracted Aiden and wanted to run, but Nicholas wasn't going to leave him. Meanwhile, Glenn tells the truth of what happened, recounting how it was Nicholas' fault Noah died. Rick listens to Glenn's account. Nicholas blames them and Deanna asks why they came back together. She rules that neither Nicholas nor Glenn can have guns or go outside the wall and Nicholas insists that Rick and the group don't fit in and have to leave. Deanna rewatches the video on her computer.

Rick and Glenn discuss the incompetence of the Alexandrians. They agree that they have to stay in the community but Rick doesn't want to listen to their rules. Glenn says that Noah believed in the community and they have to make it work with the residents. Rick sees a little boat in the pond with a red balloon tied to it.

Carol watches Sam, Jessie, and Pete from her porch. Rick walks behind her and joins. Carol asks if Rick has thought about what he said and tells Rick that Same told her Jessie tells him to lock himself in the closet when he hears his parents fighting. One time, he found Jessie unconscious, bleeding, while Pete just sat on the porch. Rick asks why Carol cares about Jessie, and she implies because of what used to happen to her. She tells Rick she knows that he does because of the way he talks to her and concludes with, "if walkers hadn't gotten Ed, I wouldn't be standing here right now."

Rick approaches the pond with his gun drawn but hidden. Pete calls out for him. Rick ignores the first time, then turns around. Pete asks if he is okay but Rick just stares him down and tells him to keep walking, hiding his gun the whole time.

It's day time. Michonne wakes up and looks at her laundry basket. She looks at her clothes and lays them out on her bed. Rosita comes in and tells Michonne Tara is doing okay, but she thinks Sasha spent the night in the tower and no one has seen her. Michonne and Rosita go through the woods when they hear something and raise their guard before continuing. The two discuss how different it feels to be outside and that it may not be a good thing for it to feel different. Rosita tries to look at the bright side but Michonne reflects on Noah dying. Rosita points out that Michonne didn't bring her sword as a testament to Michonne's adjustment to a comfortable, safe life.

Rick and Deanna speak over Aiden's grave. Rick tells Deanna that there's a problem with Pete. Deanna acknowledges that she knew and hoped it would get better, but Pete's a surgeon and he saves lives. Rick suggests that they separate Pete and Jessie to protect her. Deanna asks what happens when Pete doesn't cooperate and Rick says they kill him. Deanna says that they don't kill, if anything they exile him. Rick doesn't want to make the community vulnerable but Deanna says that he is not executing anyone and not to ask again. Rick says there a decisions to be made. Deanna says the decisions have already been made, she wouldn't kill Rick, she would send him away.

Carl walks around the woods. He hears Enid call out for her, she knows he's following her. Carl tells her she shouldn't sneak out by herself because it's dangerous. She reveals herself and says "people always die." Carl asks what she's doing and she says, "same thing as you," and runs off as Carl chases her.

Carl and Enid come across a walker stumbling through the woods. Enid throws a timer that sets off and distracts it before the two scamper off.

Back inside the walls, Glenn approaches Nicholas and blames Nicholas for the four people lost. He tells Nicholas he has to carry five lives and deserves to be dead, going on that if the walls weren't up, he would be dead. Nicholas tries to defend himself but Glenn tells him he knows what kind of person he is and not to go outside the walls again.

Carl and Enid continue their woods play date. The sit down against a log. Enid says they're supposed to "out here." Running makes her feel better. Carl says he dreams about being in the forest with "them." Enid does, too. Carl asks if Ron knows Enid comes outside. She says he doesn't. Carl asks why he scares Enid, and she doesn't know. She pulls out a knife that belonged to her mom and starts carving another log. Carl asks what happened before she got there and while Enid dubs that it doesn't matter, Carl argues that it does. They hear walkers approaching and go hide inside of a tree, face to face. Enid whispers, "It's their world, we're just living in it." Carl thinks about taking Enid's hand but he's nervous. Enid tells Carl, "You're afraid of me, too." Walkers stumble by, one comes into focus with a W on it's forehead.

Nicholas unburies a gun in the woods and it has the J marking on it, indicating it to be the gun Rick left in the blender.

Sasha guns down a herd of walkers from behind. Michonne and Rosita catch up to her but Sasha wants them to go back. She wants to take out all of the walkers. A massive horde approaches and she stands, shooting them one by one. Michonne imagines herself slicing them up with her sword and raises her gun and helps take them out. Rosita contributes, too, with a knife. Sasha runs out of ammo resorts to a knife. She is tackled form behind but Michonne saves her. Sasha is the opposite of grateful and refuses Michonne's offer for help to her feet. Sasha says that no one can help her. She thinks about Noah and becomes emotional because she told him he wouldn't make it.

Daryl and Aaron walks through the woods and find walker limbs with no torsos. They continue on with their guard up. They find a female walker tied to a tree, naked and gutted. It was feeding walkers. Daryl raises it's head and find a W carved into it before he puts it down with a knife.

Jessie smokes a cigarette by her busted sculpture. Rick comes in and Jessie tells him she doesn't want anyone to know she's smoking. She apologizes for Noah's loss and says that Tara is in good hands with Pete. Rick says that Pete is hitting her and it has to stop. Jessie tries to make excuses but Rick straight up says, "I don't care." He tells her she can't fix it but he can. Jessie says Rick will only make things worse, but Rick says worse means Pete has killed her. Jessie asks why he cares and he struggles to answer and tell her he's trying to help. She tells him she is married and can take care of herself. She walks away and shuts the garage door on Rick.

Rick walks down the street and notices the residents doing things from the world before the apocalypse, hanging out on porches, walking dogs, playing with toys, and reading. He goes back to Jessie's house and walks in the front door. He tells Jessie that Sam asked for a gun to protect her. He tells her that if you don't fight, you die. He doesn't want Jessie to die. He can help her and keep her kids safe, all she has to do is say, "yes." Jessie asks if he would do this for someone else. Rick says no. Jessie says yes. Pete walks in from the kitchen, smugly, asking Rick what he's doing there then asking him to leave. Jessie says no. Pete approaches Jessie, who tells him he has to leave. Pete raises his voice and Rick says the two of them will leave. Pete questions Rick's authority and swings at Rick, but eventually gets thrown out the window.

Sasha hears the glass shatter from the bell tower. She sees everyone running to the fight between Rick and Pete. Both are bloodied. Jessie is crying. The two choke each other out as everyone looks on. Jessie tries to stop Pete but he hits her away, just as Rick pushes Carl away a moment later. Deanna orders Rick to stop. He does and as other approach he draws his gun. Walkers roam just outside the wall. Rick says that the others don't get it. His group lives because they can handle themselves. Nicholas hears Sasha gunning down walkers, one by one. Rick tells Deanna that her way of doing things is done and that Alexandria needs to live in the real world. Deanna says that is clear more now than ever. Rick tells Deanna that if people don't fight, they die. Michonne hits him over the head and knocks him unconscious.

One episode left this season. What did you think? How will the season end?