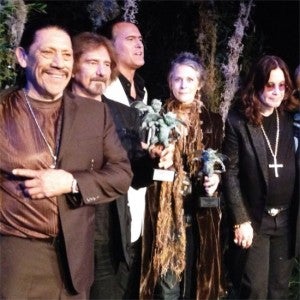 As part of kicking off Halloween Horror Nights at Universal Studios, the Eyegore Awards were held on Friday, September 20, 2013. AMC's The Walking Dead received a couple of recognitions at the show. The Walking Dead's Greg Nicotero was recognized for his achievements in horror and sci-fi entertainment. Ozzy Osbourne, Geezer Butler, Danny Trejo, Bruce Campbell were also recognized. Also, The Walking Dead's Melissa McBride was in attendance at the event to accept an ensemble award for the entire cast of the show. AMC tweeted out a photo of Melissa McBride at the Eyegore Awards standing next to Ozzy Osbourne and Bruce Campbell. The Walking Dead Season 4 premieres on Sunday, October 13, 2013 on AMC.