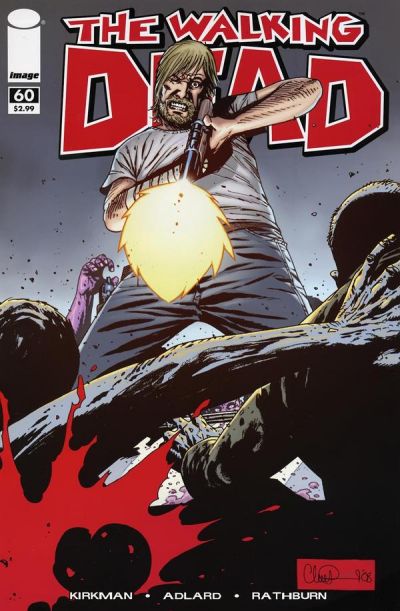 What was Robert Kirkman thinking when the events currently taking place on AMC's The Walking Dead were originally happening in the comics? Well, since the fall of the prison, almost all of the events of the TV series (excepting this week's) have used material from The Walking Dead #49-#60. That suggests that at any time we could start drifting into "Beware the Hunters" territory--and the fallout from Billy and Ben's strange relationship and the animal torture first revealed in #60. In that issue, while Rick, Carl and Abraham tried to avoid bringing a horde of zombies back to camp with them, the rest of the group seemed to be descending into varying degrees of urgent psychiatric need. With Dale finally ready to settle down and make a home, Maggie avoiding all discussion of her suicide attempt and the kids-well, they're kids raised in the world of the zombie apocalypse...they're bound to be a little off. Obviously, a lot of that doesn't sync up with what's going on in the TV series, but while scouring my e-mail, I found my first-ever interview with The Walking Dead creator Robert Kirkman...which just happened to cover The Walking Dead #60, and lead into "Beware the Hunters." So...what was on his mind back when he first told these stories? Read on...and chime in the comments to say whether you think some of the plot threads will be picked up in TV form. Will Ben and Billy really be what comes of Mika and Lizzie? Who might take Dale's place as the one who loses faith in Rick and wanders off into danger as a result? And will we see Morgan again soon? Flash back with me to 2009... 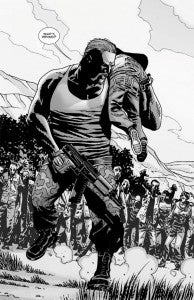 It's funny--much has been made of how credible your non-zombie threats are in The Walking Dead. Do you ever catch flak from zombie fans who feel like issues that actually focus on the living dead are few and far between? I don't remember, before this issue, the last time I was legitimately concerned about a zombie attack for more than a page or two! Robert Kirkman: Yeah, in the early days I heard a few complaints that there weren't enough zombies in the book. I recently went a year--two entire trade paperbacks' worth of issues without them killing any characters from the book (issues #49-60/Volumes 9 & 10) and thus far, nobody has noticed. Eventually I foresee being able to go an entire block of issues without a zombie appearing. I think it's important to the book that they're not the focus. If it makes sense for them to appear--like currently in the series, they'll be there...but if it ever doesn't, I'm not going to shoehorn them in just to have them there. Rick seems to be stepping back into his role as "leader" here, whether he wants to or not--he took charge of the strategic maneuvers, even if they didn't succeed, to try and keep the zed-heads away from the camp. Kirkman: I'm trying to show that it's something he can't really control. We've seen since the tragic events of issue 48 that he very much doesn't want the responsibility of calling the shots...any of them, but he just can't control who he is. There's something a little eerie about how easily Carl takes to all of this--is his mental health a long-term story? I thought for a while it was going to be something that developed quickly. Kirkman: I prefer to think of it as changes he's been going through for the entire length of the series--but it's things we're just now noticing, or being shown. Carl has certainly grown up fast, whether that's a good thing, or a bad thing...remains to be seen. Speaking of mental health--even if she isn't a threat to herself anymore, does Maggie's new outlook put her in a position to be a threat to others? Loss of faith is a powerful thing...! Kirkman: There's a lot more to Maggie, as we'll be seeing very soon in future issues. 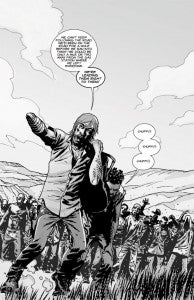 How long can we reasonably expect to see Morgan around? He seems to be having a really hard time keeping up with everyone. Or am I looking too deeply and this is just an attempt to honestly depict that not everyone would be up to Rick's level of zombie evasion skills after only a year or so?Kirkman: Maybe reading into things a bit. Morgan's not a runner...hasn't really strayed from his house very much. He could be around for years--or he could die next issue...I'll never tell. Speaking of the timeline--how long has this family been dead? They seem very well-maintained given how much damage was done to the heads of the parents and such. With no security measures to speak of, can we figure that this community had been relatively safe from infestation? Kirkman: Well, the children were poisoned and then their brains were drilled into by their parents...then the father shot the mother in the head--and then blew his own head off...so that's why they're in much worse shape than the kids. I imagine they lived for a good long while in that house, rationing food...and when it became clear that they'd have to hit the road to survive...they decided that was too dangerous. They were already miserable...so they decided to end it. Whether the father or mother were in agreement or if one killed the kids without the other knowing...we'll never really know. There's a lot of fun speculation to be had about how things went down exactly. Are the twins torturing/killing that barn cat, or just playing with a corpse? I ask to clarify, as it seems like the two are both disturbing, but one FAR more than the other. Kirkman: One definitely killed that cat, Ben...and the other, Billy, is finding him in the act. More on that next issue. What is it about Morgan that Dale finds "crazy?" After only about three seconds with the guy, to come to that conclusion makes me wonder if--even in this brave new, zombie-filled world--maybe race plays a part. Kirkman: Morgan looks crazy. He's wearing dirty clothes, he has wild hair...he looks like a homeless person. The idea is that he let himself go after his son died...sort of became a wild man. It has nothing to do with race. ...And did Dale just plain snap? It seems like he's done a quick 180, and while he's not the first one to do so in this series--he's had a long history of being very close to Rick and the gang. His change of heart seems like a huge shot to the crew's morale might be coming. Kirkman: Dale has had a lot of good ideas that have been ignored or steam-rolled over by Rick. That would get to anyone eventually. He hasn't snapped so much as he just can't ignore how much trouble Rick's been causing lately. We'll see where things go with that.