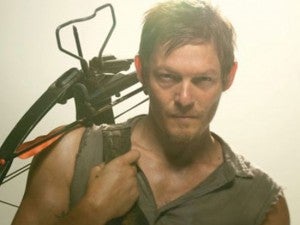 For most of the last two years, Norman Reedus's character Daryl Dixon on AMC's The Walking Dead has been unambiguously the most popular character on the series, in spite of not being the actual main character on the show. During that time, fans and critics have noted the similarity between his character and that of Henry Winkler's beloved TV icon The Fonz. Like Daryl Dixon, he was a bit of a bad boy, and his popularity overtook characters who were ostensibly "more important" than he was on the show. Arthur Fonzerelli, the leather-jacketed alter ego of Winkler on TV's Happy Days, went from being an ostensibly minor supporting character to being the symbol of the show, adorning t-shirts and lunchboxes. And it's not just the fans and the critics--Reedus's longtime friend and Boondock Saints co-star Sean Patrick Flanery sees the parallel. Taken during a panel at Calgary Fan Expo last weekend, Flanery pointed out that while Daryl is a great part, it's Reedus who brings him to life. "We met Henry Winkler a couple of months ago," Flanery told the crowd at the end of their panel. "It was really f---ing cool and it was like that dude that--we go to these and we see all kinds of famous people and celebrities and whatnot but to me that was a different level. That was the Fonz, right? And it's pretty rare when roles like that come along and they match it with the right actor to play it and he hits it out of the park. And people are like, 'Oh, a character like that is easy to play because the writing is so amazing.' Let me tell you this--an amazingly-written role, 99.9% of the actors, even though it's a fastball straight over home plate. they chip it right down the first base line maybe for an easy out. Or they'd slice it for a foul, you know? My boy took Daryl Dixon and sat Mark McGwire the f--k down with his hellacious swing and cracked that f---er over the center field fence. That motherf---er is Fonzie." Reedus may not have been the odds-on favorite to be a superstar when the series began, but the crossbow-wielding Daryl has become a fan-favorite since his "hunting for the lost child" arc at the beginning of season two, and now he's got his own fandom, he's got t-shirts and toys and was the host of Saturday Night Live. What did Reedus have to say about The Walking Dead at Calgary? On Michael Rooker: "He's cool. He's a tornado of a dude--he's very intense, he's very into his roles, he cares a lot about it and he wants to get it right and he's a lot of fun. I've got lucky with brother roles in the past ten years." On bringing his Boondock Saints co-star to The Walking Dead: "If Flanery was on The Walking Dead, all the zombies would be dead. He would f--k them up. He's a ninja." You can see all that and more in the video below.