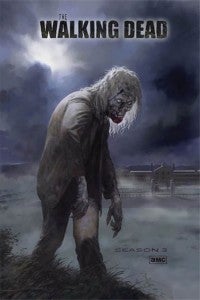 The Walking Dead is invading Comic-Con in a big way with tons of exclusives and events. Image Comics will be offering a limited edition Walking Dead Compendum hardcover. And as revealed over the weekend on Talking Dead, visitors to the AMC booth will have the opportunity to become one of Michonne's pets. There is also going to be a Walking Dead obstacle course at Petco Park. Participants in The Walking Dead Escape will get a convention-exclusive variant of The Walking Dead #100. And if you go to The Walking Dead Escape, then you might see Walking Dead creator Robert Kirkman running alongside you. When Comicbook.com interviewed Robert Kirkman in May, he said "I'm definitely going to do that. I'm going to be jogging for the next few weeks to make sure that by the time I get there I can run for any length of time." In regards to the obstacle course, Kirkman also added, "This is the first official one and it's gonna be the best one. We've got a lot of cool stuff planned for it; it's really just crazy. It's like an amusement park ride when you get in there." And AMC TV has just released an image of one more Walking Dead exclusive that will be available. Greg Capullo, who is known for his work on Spawn, has created a limited edition The Walking Dead Season 3 poster just for San Diego Comic-Con 2012. The poster shows one of the walking dead in front of the prison, which plays a major role in the setting for the third season of The Walking Dead. The Walking Dead returns to the airwaves in October on AMC.

The Walking Dead Season 3 Comic-Con Poster And Other Events