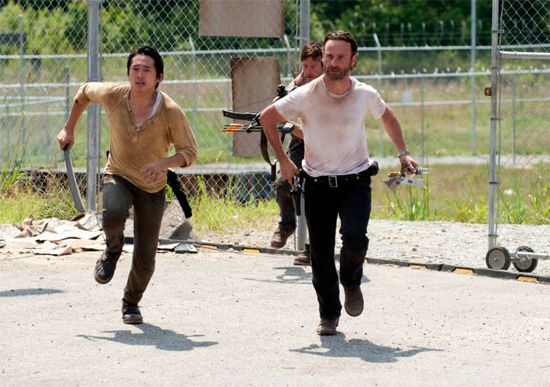 The "Killer Within" episode of The Walking Dead was such a fast-paced thrill ride that's it difficult to pick just five shocking moments. The episode offered the types of twists and turns that you wouldn't expect to see until a season finale. We actually caught a sneak peek of it a week ago, and we're still kind of dazed from everything that happened. Here are our picks for the five most shocking moments from "Killer Within." 5. Andrew Is Alive – When last we saw Andrew, he was locked in the courtyard about to become lunch for a pack of walkers. However, it turns out that Andrew escaped the walkers, and he returned to create havoc for Rick and his group. 4. T-Dog Dies – While T-Dog was on pretty much everyone's list as someone who probably wouldn't make it through the season, it's always shocking to see a main cast member die. After getting bitten, T-Dog proved to be a true hero, and he sacrificed himself to make sure that Carol escaped safely. 3. Maggie Cuts Baby Out Of Lori – One of the most gruesome scenes ever shown on The Walking Dead. When Lori realizes she's losing a lot of blood and the baby isn't coming out, she asks Maggie to perform a C-section even though it means certain death for her. 2. Carl Shoots Mommy – With Lori dying during the C-section, it's up to her son Carl to make sure that she doesn't come back as a zombie. Carl says that it's his mom and his responsibility. While viewers don't see what actually happens, the sound of a single gunshot and Carl emerging from the room tells the story. 1. Rick Breaks Down – If Carl shooting his own mother wasn't tragic enough, Rick meets back up with the group to learn his wife Lori is dead. While few words are spoken about what happened, Rick breaks down in tears. Andrew Lincoln really delivers a riveting performance that makes viewers really experience the pain that his character Rick is feeling.