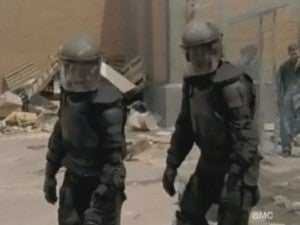 Wow! The Walking Dead kicked off in silence, but ended with a bang (or a hatchet to be more precise). Robert Kirkman wasn't kidding when he said season 3 was going to have a much faster pace. Here are five scenes from The Walking Dead season 3 premiere to discuss. 5. Zombies In Riot Gear – Rick Grimes and his crew turn a corner at the prison and come face to face with zombies in riot great. Daryl Dixon quickly learns that firing a crossbow at a zombie wearing a helmet and protective face cover is pretty much worthless. It turns out the only way to kill a zombie in riot great is up close and personal. 4. Michonne And Her Pets – At the end of Walking Dead season 2, we got only a brief look at Michonne and her pets. While it was great to see Michonne use her katana to take out multiple zombies in her trip to get aspirin, the most awesome scene had to be Michonne returning home to her armless and jawless zombie pets. 3. Lori Grimes Worries About A Zombie Baby – When Lori Grimes talks about not feeling her baby move, she raises a horrifying possibility. If everyone is infected, what happens if the baby dies in the womb. A zombie baby could literally rip Lori to pieces form the inside out. 2. Other Survivors In The Prison – At the very end, Daryl shines a flashlight into the darkness expecting to see more zombies. However, what he sees  instead are other survivors. Who are the other survivors? Will they be friend or foe? 1. Rick Chops Off Hershel's Leg – When Hershel gets bitten in the leg, it looks like he's doomed to become a zombie. However, the group drags him away, and then Rick Grimes takes a drastic measure. Rick chops off Herschel's leg with a hatchet. Will this be enough to save Hershel from becoming one of the Walking Dead?

House of the Dragon: Who Is Harwin Strong?