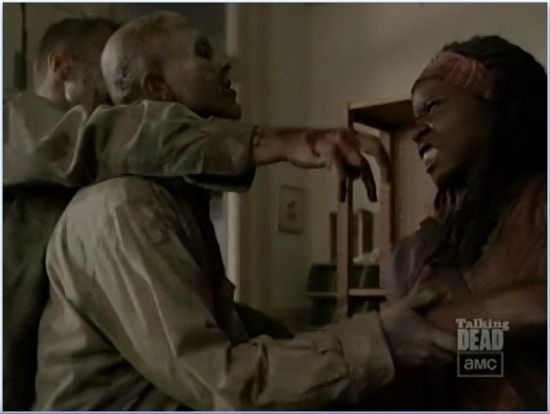 On tonight's Talking Dead talk show, host Chris Hardwick talked with Executive Producers Glen Mazzara, Gale Anne Hurd, David Alpert, and Robert Kirkman. Comedian Drew Carey was also a special guest. There was also an exclusive sneak peek of The Walking Dead season 3. The clip isn't yet online, so this description and these screen captures will have to do for now. We'll add the clip when it becomes available. To introduce the clip, Kirkman said, "It's awesome, and it's exactly what you've been wanting to see since season two ended." The sneak peak starts with a tattered American flag blowing in the wind, before focusing in on a brick building. Inside the building, a zombie is silently waiting when a shadowy figure carrying a sword enters the building. The zombie starts to chase the shadowy figure, and he is suddenly knocked back into a wall of shelves. The shadowy figure is revealed as Michonne, who chops the zombies head completely off with one swing of her sword. The zombies' head roles across the floor. Two more zombies stagger forward, but Michonne stabs them both through the heart at one time with her sword. Michonne then pulls the sword out and slashes both of their heads off with one swipe. After killing the zombies, Michonne bends down and picks up a package of aspirin off the floor. The scene ends with a closeup of one of the zombies' heads on the floor with its mouth still moving. 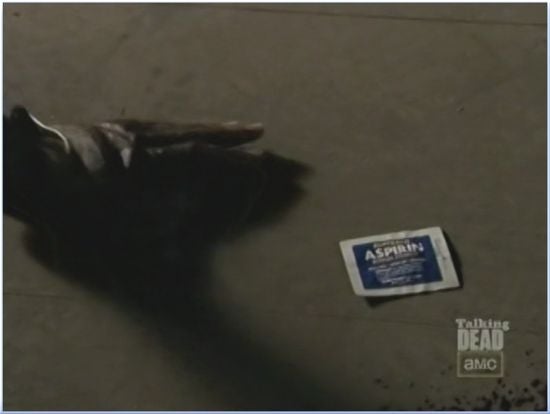 Chris Hardwick asked Robert Kirkman, "Who was the aspirin for?" Kirkman said, "Yeah, what's up with that, right? She's just finding a bunch of aspirin. That's what she does actually. It has no meaning whatsoever." Then, Kirkman added, "I mean, who was she with last time? Who could this aspirin be for? I don't want to spoil anything, but the aspirin it's a big reveal." Alpert joined in, "But actually, it's not really aspirin. There's a big twist." Finally, Kirkman joked, "I'm sick of teasing and not really answering questions, so I'm just going to say that we're revealing this season that aspirin is the cure for zombie-ism."The Walking Dead Season 3 will premiere in October 2012 on AMC. 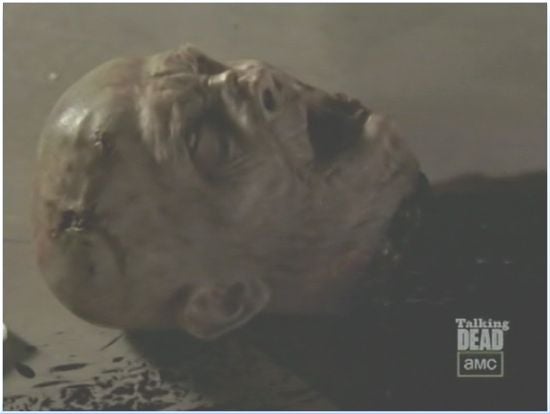