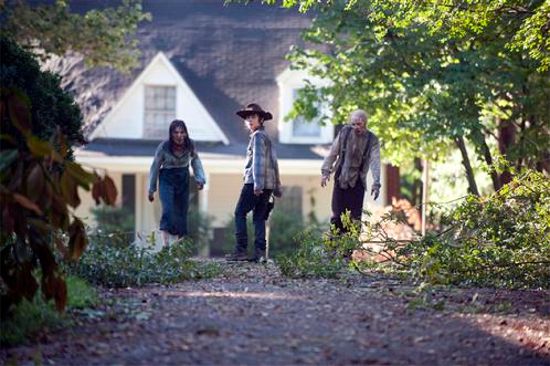 creator Robert Kirkman had a message for fans at the Amazing Arizona Comicon. AMC is worried about The Walking Dead. No, they aren't worried about the ratings, which couldn't be better and are the envy of every other network on television. AMC is worried because things are going to be going down a darker road in the remainder of Season 4, just like in the comic book series. When asked if the show would show the darker side of humanity like in the comics, Kirkman said, "The rest of Season 4 starts February 9, and it gets pretty dark. I guess the answer is 'yes.' But just how far we go and what we do and stuff, you'll just have to watch. But I will say that the show will continue to get a little bit bleak at times and a little bit darker as the world progresses, and as things get a little bit more dire as they have in the comic. So we're not going to be pulling any punches, and there's a lot of stuff coming up that AMC is very worried about, which makes me happy." The Walking Dead Season 4 returns on Sunday, February 9, 2014 on AMC.

The Walking Dead Season 4 Is Going To Get Darker