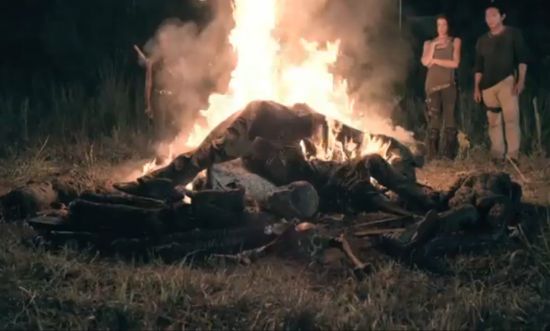 AMC has released a new 30 second clip for The Walking Dead Season 4 Premiere "30 Days without an Accident." As seen in previous previews, life has changed dramatically at the prison. As the title of the premiere indicates, Rick's group has started to build some semblance of a normal life at the prison. The group has started growing crops, raising livestock, and even has story time for the children. In this latest clip, Rick and the others relax by a nice, toasty campfire. A campfire made out of zombies that is. As the crickets chirp in the background, the only thing missing is Glenn roasting marshmallows. No words are spoken in this new clip, but the promo title at the end says it all: "Pray for the dead." Or is that "Prey for the dead?" The Walking Dead Season 4 Premiere airs on Sunday, October 13, 2013 at 9 PM ET on AMC.