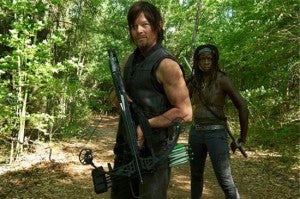 AMC has released the character descriptions for Season 4 of The Walking Dead, and they contain a couple hints at what the future has in store for several characters. With Rick still recovering from the death of Lori, it looks like Daryl will have the chance to step up into more of a leadership role. Of course, Daryl is also struggling with the loss of his brother Merle, so there are questions over if Daryl will be able to rise to the occasion. In one of the Season 4 preview trailers, Tyreese was shown kissing the hand of Karen, which had us speculating that the two might be a couple. The official AMC character descriptions for Season 4 confirm that there is definitely a relationship brewing between Tyreese and Karen. However, the character description for Karen notes that even though she is teaching Tyreese "what love means," she is reluctant to use the term "boyfriend." Check out the full character descriptions for Season 4 below. RICK GRIMES - Rick is slowly recovering from the loss of his wife. With new people at the prison, the group dynamic has changed dramatically and the pressures and threats have started to multiply. All along, Rick is fighting to return to the man he once was, but is it a battle he can win? DARYL DIXON - While Daryl still struggles with the loss of his brother, he now has the opportunity to become a leader. Will he rise to the occasion? GLENN RHEE - Glenn is working to mend his relationship with Maggie and keep her safe. Will his focus on survival clash with Maggie's priority of living normal lives? MAGGIE GREENE - Having regained her confidence, Maggie wants to somehow find a way to live, not just survive, even when the world is telling her that nothing else matters but staying alive. CARL GRIMES - Carl has physically lost his mother, mentally lost his father, and emotionally lost himself. Rick wants Carl to step back from being a child soldier, and Carl is trying to honor those wishes. Will the world let him? MICHONNE - Michonne has struggled to feel at ease in large, or even small, groups. And she too, has unfinished business. Where will she focus her efforts? CAROL PELETIER - Carol has become a confident contributing member of the community. Now a formidable fighter, Carol is determined that no one become anything like the victim she used to be. HERSHEL GREENE - As the voice of reason, Hershel will once again have to make life or death decisions. How long can he live by his core values? What's the cost of taking in so many new people with the threats around him increasing exponentially? THE GOVERNOR - The Governor has unfinished business. What can stop a man when his mind is made up? BETH GREENE - Beth appreciates her place within the larger group. She is a far cry from the suicidal teenager she once was. She is ready for love to find its way to her, but is she emotionally prepared? TYREESE - Tyreese feels lucky to be alive. Will he be able to balance the loss the group has endured with his new relationship with Woodbury survivor, Karen? SASHA - As Tyreese's scrappy no-nonsense younger sister, she might be the only person able to help Tyreese understand what the others have endured. Her practical approach to survival is challenged by the nature of their new threats and by the relationships that are developing. KAREN - Though Karen is reluctant to use the term "boyfriend," she helps Tyreese understand what love means in this new world. BOB STOOKEY - Like Michonne, Bob has secrets. He is fighting his own demons, and struggles to control them. The Walking Dead Season 4 premieres on Sunday, October 13 at 9 PM ET on AMC.