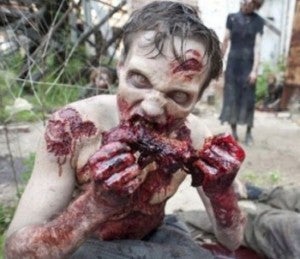 While The Walking Dead Season 3 seemed to focus more on the human threat posed by The Governor, it looks like Season 4 will shift back to focusing more on the Walkers.  Both executive producer Gale Anne Hurd and actor Norman Reedus have gone on record indicating that the Walkers will be more of a threat in Season 4.

In a new interview with AMC about Season 4, Gale Anne Hurd said, "I think we'll have walkers who are even more ravenous than before. We're in a world where there are fewer people and more walkers, and I wouldn't be surprised if we saw that on-screen this season."

And it's not only the Walkers that are more ravenous apparently. The cast and crew also has to contend with shooting for long hours outdoors and unpredictable weather. In order to keep everyone motivated, the producers and AMC provide treats to the cast and crew, such as late-night coffee, sorbet, or gourmet mac and cheese. Gale Anne Hurd said, "If you keep peoples' stomachs happy, it tends to make all the uncomfortable heat, humidity and bugs more bearable."

The Walking Dead Season 4 will air on AMC in the fall.