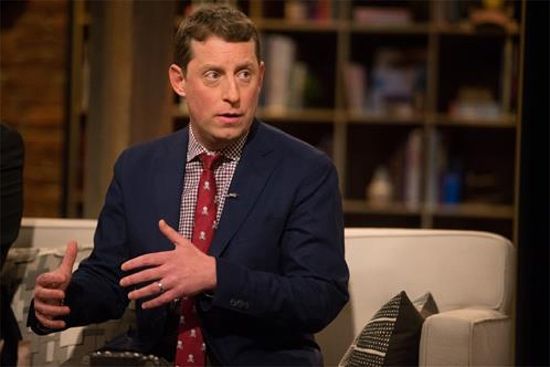 showrunner Scott Gimple appeared this week on Larry King Now as part of Showrunner Week. During Gimple's appearance, King grilled the showrunner for any scoop that he could reveal on The Walking Dead Season 5. "Well, I would say this, 'The show every eight episodes reinvents itself.' Like this last half season we focused on all these different characters, before that there was a different structure where we had a couple of different big stories crash together," said Gimple. "Action, intensity, there'll still be the character stuff there, but the balance is going to be a little different." When Larry King asked if there would be more action than usual in Season 5, Gimple replied, "The story that we're telling demands it. We're not going to shy away from character, but the balance will be a little more towards action." When Larry King asked if there would be any laughs, Gimple answered, "Yes, absolutely. I want to represent the whole of human experience. I don't want to show just horror and misery, because if you just do that, it doesn't mean anything. You need the light. You need humanity. You need love. You need friendship. Because those are the things that you're trying to maintain amidst these horrors, and when you win, that makes the victories that much more sweet, but when you lose, it makes things that much more dark."

The Walking Dead Season 5 To Have More Action And Laughs