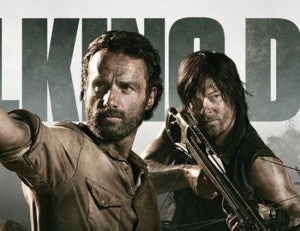 According to a report on 11Alive News, AMC's The Walking Dead had to temporarily halt filming last week after a production member was injured in an on set accident. The accident occurred on Friday, September 6, and the injury was serious enough that the injured party had to be airlifted from the Senoia, Georgia filming location to a metro Atlanta hospital. Fortunately, according to an AMC spokesperson, the injuries turned out to not be life-threatening, and the injured production member has already been released from the hospital. No details were provided on who the production member was or how the injury occurred. While the zombies might not be real on The Walking Dead, action shows require extensive stunt work, so on set injuries are always a risk. Even though production was halted due to the accident, filming has since resumed, and an AMC spokesperson said the upcoming season would not be affected. The Walking Dead Season 4 premieres on Sunday, October 13, 2013 on AMC.