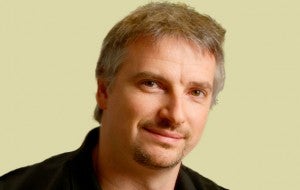 Glen Mazzara has stepped down as showrunner on AMC's ratings juggernaut The Walking Dead, according to a joint statement issued by AMC and Mazzara. According to the statement, "for future seasons of The Walking Dead, the two parties [AMC and Mazzara] have mutually decided to part ways." This is, of course, the second time that the hit series has lost a showrunner--Frank Darabont, director of The Shawshank Redemption and the man responsible for bringing the series to AMC in the first place, was replaced at the last minute just before the launch of season two. Following his departure, Mazzara acknowledged that some of season two's problems were the result of a writing staff flying by the seat of their pants. "My time as showrunner on The Walking Dead has been an amazing experience, but after I finish season 3, it's time to move on," Mazzara said. "I have told the stories I wanted to tell and connected with our fans on a level that I never imagined. It doesn't get much better than that. Thank you to everyone who has been a part of this journey." "I am appreciative and grateful to Glen for his hard work on The Walking Dead," said executive producer Gale Anne Hurd, who will doubtless be one of the names bandied about to replace him. "I am supportive of AMC and Glen's decision and know that the series is in great hands with one of the most talented and dedicated casts and crews in the business. I look forward to the show's continued success." "I am in full support of both AMC and Glen Mazzara in the decision they have come to and believe the parties came to this decision in the best interest of the future of the show," added series creator Robert Kirkman, who also executive produces the TV adaptation. "I thank Glen for his hard work and appreciate his many contributions to The Walking Dead and look forward to working with him as we complete post production on Season 3. I am also excited to begin work on another spectacular season of this show that I know means so much to so many people. This show has always been the result of a wide range of extremely talented men and women working tirelessly to produce their best work collectively. I believe the future is bright for The Walking Dead. Thank you to the fans for your continued support." Along with the statement came confirmation, if any was needed, that The Walking Dead will return for a fourth season, something that Hurd told ComicBook.com recently was not yet confirmed. AMC has had some trouble hanging onto showrunners; not only did they fire Darabont, but persistent disagreements with Breaking Bad creator Vince Gilligan have reportedly led to the decision to wrap that series.