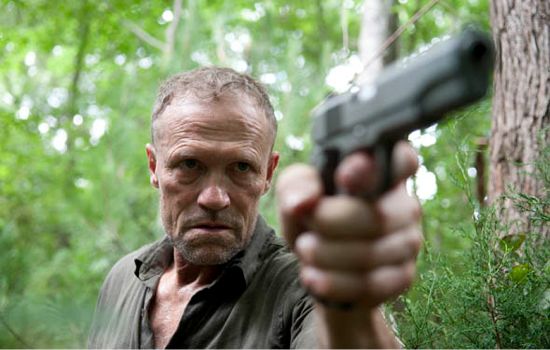 Last week, the "Say The Word" episode of The Walking Dead showed us what the fine folks of Woodbury like to do for entertainment. At the end of the episode, Rick Grimes got a phone call in the prison. Who could be on the line? Or has Rick just gone completely crazy? This week's episode of The Walking Dead is entitled "Hounded." According to the AMC description, "As Andrea grows closer to the Governor, Michonne makes a decision about Woodbury. Glenn and Maggie go on a run. Rick struggles." In the official sneak preview for "Hounded," the survivors in the prison are enjoying a meal, when Rick Grimes shows up. Rick asks if everybody is ok, and Maggie says they are, but then Hershel asks, "What about you?" Rick says that he cleared out the boiler block. When Daryl asks how many were there, Rick doesn't know, but he estimates a dozen or two dozen. Rick says he just wanted to check on Carl, but he has to get back. When Glenn offers to handle taking out the bodies, Rick says he has to do it. Rick asks Daryl if everyone has a gun and knife, and Daryl says they are starting to run low on ammunition. Glenn says he and Maggie are planning to make a run to look for bullets and formula. Daryl also says he cleared out the generator room, and Rick says "good" before leaving again. The "Hounded" episode of The Walking Dead airs on AMC on Sunday, November 18 starting at 9:00 PM ET. The "Hounded" episode is written by Scott M. Gimple and directed by Dan Attias. Check out the one minute and eighteen second sneak preview of the episode below.