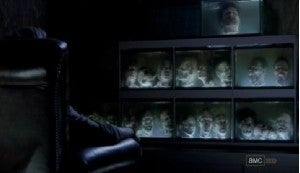 In an interview with The Hollywood Reporter earlier this weekend Glen Mazzara, executive producer of AMC's The Walking Dead, was asked about five particularly iconic moments from the comics that centered around the Governor and Woodbury. Asked whether those moments would appear on the small screen, not a lot of news came out of it--he said more than once that they were taking the storyline slow, implying that perhaps the final big showdown with the Governor might not be the season finale this year as most fans had expected. Ahead of tonight's status quo-changing episode, though, there was one question out of the five that he answered...and it's the one most likely to excite fans who complained that last year was too slow and didn't feature enough zombies. Asked whether Woodbury's gladiatorial arena--which pits live people accused of breaking the community's laws against zombies for the entertainment of the masses--would appear in the series, Mazzara took time away from being evasive and answered the question head-on. "That's something that I think people can look forward to this season," the producer told THR. "I'd hope people would think it's an exciting scene. I won't give away who could be in there but it could be anybody." Other questions asked (and ducked) included whether the Governor would cut off Rick's hand; whether he would torture and rape Michonne; whether she would in turn maim him by beating and dismemberment; and whether the Governor would attack the prison, killing Lori in the process. Mazzara, as implied above, talked around each of these, saying that so far, the Governor doesn't even know about Rick or the prison and that he and Michonne have an icy, but not yet confrontational, relationship. Tonight's episode is a big 'un...and it's on in five minutes.