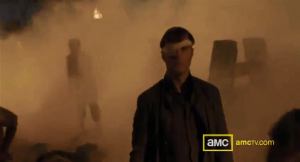 The teasers that have been made available so far for the midseason premiere of AMC's The Walking Dead ("Suicide King," airing February 10) haven't been particularly information-rich, but we've got a few ideas of what to expect from watching it. And we're sharing them with you, because that's how we roll. It should go without saying that there are both actual and potential spoilers for the next episode of The Walking Dead, as well as last night's episode for those outside of the U.S., who may not have seen it yet. It looks like there's a second attack on Woodbury More smoke, more chaos--but this time with the Governor standing there, eyepatch already on. So in other words, it doesn't look like this is just backtracking and flashing back to the fight that just happened. Is it just us or does it look like Rick and company launch a second attack on Woodbury by the time the night is through? Maybe that's why... 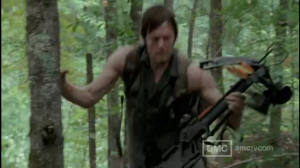 Daryl makes it out of the arena. The midseason finale's cliffhanger suggests a bad, bad situation for Merle and Daryl Dixon, but at least one of the brothers - fan-favorite Daryl - will make it out of the arena and, apparently, out of Woodbury. Eagle-eyed fans spotted Daryl making his way through the woods, crossbow in hand, almost immediately after the episode aired. What does that mean for Merle? It's hard to say - and of course this sequence could always be a flashback, or some other trickery, given that it seems to blow their finale tease. 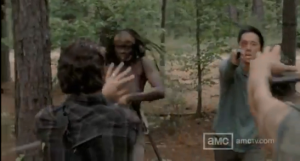 Glenn pulls a gun on Rick We're guessing Merle lives, at least for the time being, because when Rick and (it looks like) Maggie make their way into the woods with someone in tow, Michonne and Glenn run at them, weapons drawn, and Glenn demands, "What the hell is he doing here?" Within a second or two of that shot, we see a muscled left arm come into frame that looks too masculine and bare to be Maggie's. The lack of sleeves seems like a giveaway that it's either Merle or Daryl, but it's hard to imagine Glenn being quite so sorry to see Daryl. Of course - this also looks to be the next day. One has to wonder whether Rick sent the injured parties (Michonne and Glenn) ahead to start home so as not to lose them, and then made a bold move to rescue the Dixons with only Maggie at his side. 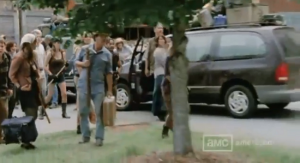 An evacuation in Woodbury? We got so caught up in the stuff happening to the good guys that we forgot to take note of this: it appears as though at least some of the residents of Woodbury no longer feel safe in the wake of the "terrorist" attack on the town. Could this change the conversation in terms of whether the Governor wants to take over the prison? It's one thing to say "they want to feel normal" when everyone's under control and confident in their safety. When they start to freak out, perhaps this could turn into a full-scale war when the Governor tells them that there's a more secure alternative and all we have to do is kill the "evildoers" who wronged us. It seems as though the Governor's hand has been forced by the attack on his town in a way that it wasn't in the comics. To see him hanging out of a car blasting a machine gun in the air already in the midseason premiere gives a sense of the stakes. Andrea heads to the prison It's not clear why the zombie she's corralling has a bag over its head, but Andrea heads to the prison in the next episode. After telling the Governor that she needs to go see Rick and the survivors, we see her headed there and what appears to be the Governor watching her approach. The Governor doesn't totally trust his girlfriend, so could it be that she's in real, physical danger with the Woodbury group toting guns behind her? And what's she going to think if she does make it inside the prison and learns that the Governor sexually assaulted Maggie? Carl has his doubts Probably the single line of dialogue that's going to strike people as the oddest is Carl telling Rick that he should stop being the leader. It's unclear exactly what the context is, but given that Carl has been stepping up so much lately to try and fill his father's shoes when he's missing, it could be that he thinks he can do it while Rick recuperates from his wife's death and the hallucinations that have followed. On the other hand, he could just be worried about his dad. What do you think?