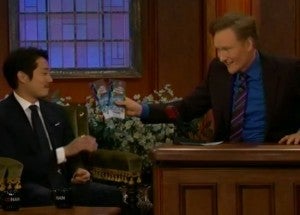 Fans who missed out on last night's episode of Conan, in which talk show Conan O'Brien host gave The Walking Dead's Steven Yeun a pair of tickets to the NCAA Final Four, can now check out excerpts from the interview below. Embedded via Conan's website, the clips show Yeun and O'Brien talking about basketball and strip clubs. Yep. Also included for good measure is a clip from the last time Yeun was on the show, during which time he talked about Robert Kirkman's The Walking Dead comic books, adding that he thinks he has better cheekbones than comics-Glenn.

New Update on WWE's Plan for the WWE Universal Championship