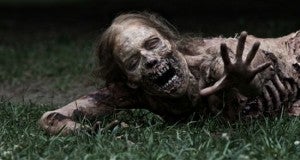 While we ran a report earlier this week from The Citizen which seemed to indicate that the Walking Dead had officially been picked up for a fourth season, it turns out that is not the case. The report cited a statement made by Stalwart Films spokesman Mike Riley last week the indicated the show would be returning for a fourth season and would be associated with Senoia's Raleigh Studios. While The Walking Dead is very likely to return for a fourth season, Comicbook.com has learned that AMC has not officially picked up the show for another season yet. In an exclusive interview with Executive Producer Gale Anne Hurd, Comicbook.com asked, "Can you clarify if the show has been renewed for a fourth season or not yet?" Gale Anne Hurd's answer was "Not yet." So why has AMC not yet pulled the trigger on renewing the top rated show on television? We're not sure, but we imagine there must be some budget related contract details to work out. Hopefully, there will be an official announcement of the show's renewal soon.

The Walking Dead Still Not Officially Renewed For Season 4