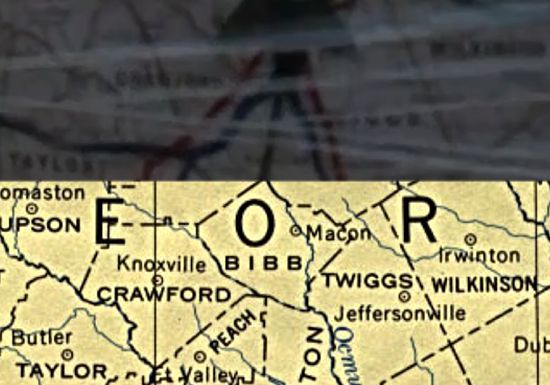 Back in February, Comicbook.com offered up the theory that Terminus was located in the city of Macon, Georgia. At the time, all we had to go on was a blurry, distant look at Terminus marked on Georgia map in the "Inmates" episode of The Walking Dead. On tonight's "Alone" episode of The Walking Dead, viewers got a much closer look at the map, as Glenn pointed his finger straight at Terminus at the end of the episode. We enlarged the spot where Terminus was located on the map, and it was possible to read some of the Georgia county names around Terminus. While a big black star is obscuring the county name for where Terminus actually is, Crawford county can be made out directly to the left of Terminus. On the right side of Terminus, Twiggs county and Wilkinson country are visible. The country that lies in between Crawford and Twiggs on a Georgia map is Bibb county, which is the county where the city of Macon is located. In The Walking Dead video game, Lee Everett and a group of survivors take refuge in the city of Macon. Could viewers be about to see some characters from The Walking Dead video game pop up in The Walking Dead TV Series?

Dragon Ball Z Cosplay Travels To The Future With Trunks

Will CM Punk's WWE Departure Be a Dark Side of the Ring Episode?