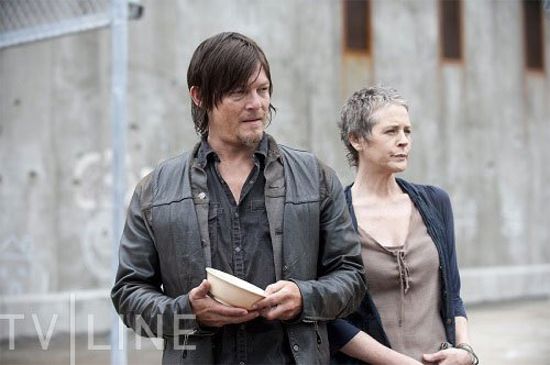 When thinking recently about the prospect of adding Negan to the cast of AMC's The Walking Dead, something occurred to me: The Walking Dead may have a problem translating one of its most time-tested comic book storytelling devices to television. That is, the weird quirk of the ever-escalating "bad-ass" characters they introduce. How so? Well, Tyreese hurls himself into a locked room with dozens (hundreds?) of walkers and kills them all with a hammer while the rest of the group is away, so who's the next major character we meet? Michonne, of course, who carries a samurai sword, has "pet" walkers and is so irresistibly awesome that she seduces Tyreese. The Governor comes along and, by way of proving how formidable he is, he assaulted both Michonne and Rick, leaving them both scarred before going out in a blaze of glory the likes of which the series had never seen--until Dale's epic death scene shortly thereafter. The device seems to have found its natural conclusion in Negan, a character whose only defining characteristic is that he's menacing and tough. The problem, of course, is that the TV series has two things that the comic books don't, both of which make it difficult to use the escalating bad-ass plot device: TV standards and practices...and Daryl. Fans around the Internet would flip their collective $#!+ if Daryl was out-badassed, and that's fine...because in order to get to where Negan, or even The Governor, was, you'd have to violate network standards and practices in a dozen ways that the show will never be able to swing. This is going to force them to have to give characters other defining traits--Tyreese, for instance, seems to be getting a humanity and tenderness that I never really associated with his character in the comics ("I don't like this either..."). Because just being "the group's badass" isn't going to be a title that you can take from Daryl. As they tease The Sanctuary, then, what can they do to make Negan a compelling character when his non-stop swearing and ultra-violence will pose a problem to the show in terms of what the network is willing to run, and when it's impossible to out-badass Daryl without alienating the core audience? It's hard to say, although certainly the fact that it seems he'll be introduced within a season of The Governor's final appearances can't help differentiating him from the previous villain all that easy. On the other hand, you get Carol, who seems to be rising into the role...albeit in a kind of sideways fashion. Certainly she won't ever take over the role of lead badass from Daryl, but the fact that she can get away with calling him "Pookie," and that she started from such a low beginning (the mousy woman whose husband beat her in the first season) gives her character a sense of forward progression that nobody, including Daryl, who pretty much started out the same guy he is now, can quite keep up with. And look what she got for it...!