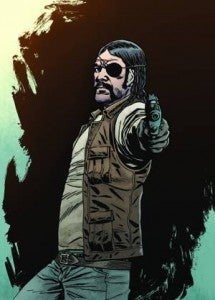 Anyone out there who believed the rumors floating around the Internet a while back that AMC's hit zombie drama The Walking Dead would shock fans by killing off the Governor--the season's central antagonist--in February when the show returns can probably discount those rumors altogether now, as Image Comics and Skybound will be releasing The Walking Dead: The Governor Special. It's hard to imagine the publisher investing more in his story if he were already dead to the TV audience, who would be the target for this kind of publication. Rather, it's been suggested that following last episode's trauma, the character on TV is just now coming into line with where the Governor was when we "met" him in the comics, so this might be The special is a one-shot comic that will collect a story of the character's early days previously published in the 2012 CBLDF Liberty Annual and the Woodbury dictator's first encounter with Rick Grimes and his band of survivors from The Walking Dead #27. The fan-favorite villain only lasted a little under two years in the comics, but has become the most iconic and recognizable antagonist in the series; his appearance on AMC's The Walking Dead came this season with as much fanfare as the introduction of Michonne, a long-running supporting cast member who still appears in the comics to this day. Michonne's first appearance, as well as an origin story for the character printed in an issue of Playboy earlier this year, were collected as The Walking Dead: The Michonne Special, released in October. That one-shot fell in the week before New York Comic Con, which coincided this year with The Walking Dead's season premiere. The Governor is also the subject of a trilogy of novels by The Walking Dead creator and writer Robert Kirkman along with collaborator Jay Bonansinga. The first two novels -- The Walking Dead: Rise of the Governor and The Walking Dead: Road to Woodbury -- are already available while a third is currently being written. Elements of those novels seem to inform the character's portrayal both on the TV series and in the story from the Liberty Annual.

The Walking Dead: The Governor Special Hits the Stands in March