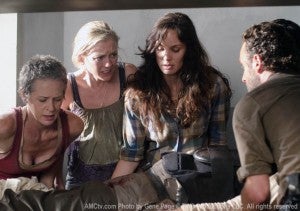 What were our favorite moments from this week's episode of The Walking Dead? Read on. The world outside There was something really haunting about watching a new group of characters suddenly coming to the realization of what the world is like outside. We haven't seen anyone genuinely surprised by it since Rick woke up in the pilot, with every character we've encountered along the way having some degree of hands-on experience with walkers. The prisoners, meanwhile, are being told all of this even farther down the line--and while it surely makes sense to them on some level (even before they're told that everything has gone to hell, Tomas says something along the lines of "I think there's nothing out there to go back to"), it's fascinating to see the bits of doubt and denial ripple through the group. Aim for the head. After having told the prisoners a number of times that the way to kill walkers is to aim for the head, ignore center mass and don't brawl, when the time came for Rick to take down Tomas, their hot-headed leader, he heeded his own advice to fairly spectacular effect--a machete directly to the crown of his adversary's skull. CPR attack When Lori decided to give Hershel CPR after he stopped breathing, the end result was one of the show's scariest moments as his body jerked back to consciousness and he appeared to be attacking his rescuer. It was only a couple of second before Lori pulled away and Hershel resumed his coma--but it was a tense scene, as the nine-months-pregnant wife of the main character found herself apparently attacked by a walker onscreen. 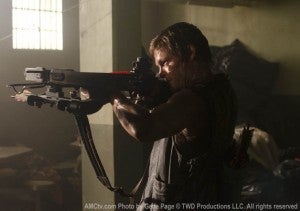 "Run." Together with the aforementioned machete attack on Tomas, Rick chased Andrew, Tomas's  second in command, through the darkened halls of the prison. At the end of the chase, Andrew ends up in the yard--and is locked into a 20-foot square area along with bunches of walkers who then tear him apart on the other side of the door. Rick's advice for him just before he closed and locked it? "Run." Who's that? This one not really a "best" as much as it is notable for the future--who's watching Carol? And why? Is it Tyreese? Someone from Woodbury? Andrew, having survived the attack of the walkers? It seems likely we'll find out sooner than later.